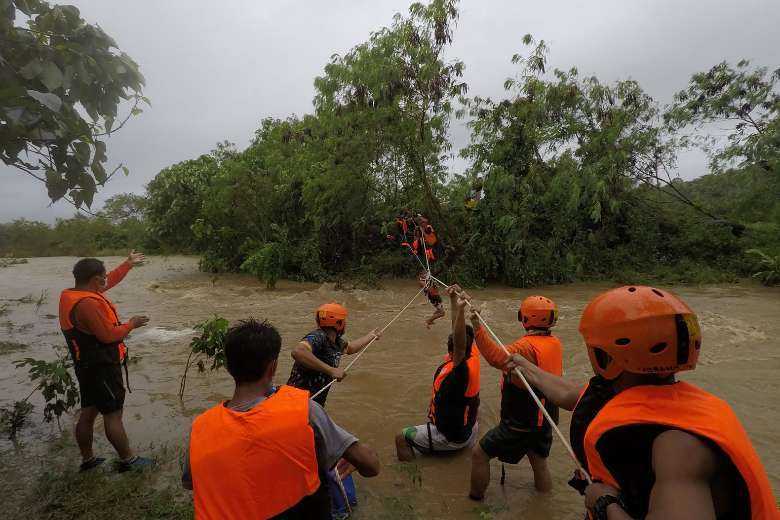 Rescuers evacuate residents from their homes near a swollen river due to heavy rains brought about by Tropical Storm Kompasu in Gonzaga town, Cagayan province, north of Manila, on Oct. 11. (Photo: AFP)

The death toll from a storm that triggered landslides and flash floods across the Philippines has risen to at least 19, authorities said today, linking the extreme rainfall to climate change.

Tropical Storm Kompasu dumped more than a month's worth of rain in two days as it swept across the archipelago nation this week, national disaster agency spokesman Mark Timbal told AFP.

Kompasu — named after the Japanese pronunciation of "compass" — intensified the southwest monsoon that had already saturated swathes of the disaster-prone country.

Provinces on the most populous island of Luzon were hardest hit by the storm, which caused more than a billion pesos (US$20 million) worth of damage to the agriculture sector and damaged hundreds of homes.

Timbal said the rainfall was "even greater than the Ondoy experience," referring to the devastating Typhoon Ketsana, known in the Philippines as Tropical Storm Ondoy, that hit in 2009 and claimed hundreds of lives.

"This only proves the effect of climate change when it comes to the increasing magnitude of these natural hazards," Timbal said.

Each hazard is unique to the next one. It's a new normal caused by climate change

"This continues to pose a challenge to our disaster management system — we always have to step up our preparations in view of the worst-case scenario for every natural hazard."

Because a warmer atmosphere holds more water, climate change increases the risk and intensity of flooding from extreme rainfall.

Nineteen deaths have been confirmed so far, the majority in the northwestern province of Ilocos Sur where most of the victims were caught in flash floods.

The disaster agency is also checking another 11 reported fatalities, mostly in the landlocked mountainous province of Benguet.

A total of 14 people have been reported missing.

Timbal said the "changing nature" of the hazards had made it difficult to achieve their target of zero casualties.

"Each hazard is unique to the next one," he said. "It's a new normal caused by climate change."

Timbal added that nearly 15,000 people fled their homes but only about half stayed in evacuation centers. The rest sought shelter with friends or relatives due to fears of catching the coronavirus.

The storm moved across the South China Sea on Oct. 12 towards Hong Kong, forcing the international business hub to batten down.

The Philippines — ranked as one of the world's most vulnerable to the impacts of a warming planet — is hit by an average of 20 storms and typhoons every year, which typically wipe out harvests, homes and infrastructure in already impoverished areas.