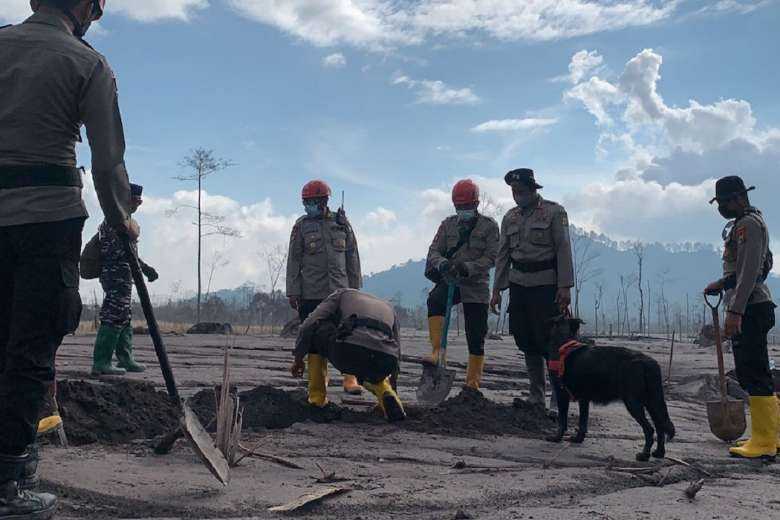 Rescuers in Indonesia were still finding bodies on Dec. 10, one week after a deadly eruption in East Java province killed dozens of people and displaced thousands of others.

The continuing search under thick layers of ash and debris dumped by the Dec. 4 eruption of Mount Semeru — the country’s highest and one of its most active volcanoes — has uncovered 44 bodies so far, according to Indonesia’s National Disaster Mitigation Agency.

At least 16 other people were still missing presumed dead and more than 6,000 others remain displaced, the agency said.

Some 11 villages in Lumajang district were buried by volcanic ash that covered more than 2,500 houses and killed large numbers of livestock.

Government experts believe the eruption was triggered by days of heavy rain that wore away a hardened lava dome at the crater that had acted as a plug.

"A big mass of the dome's volume was lost after a heavy spell of rain that day," CNN Indonesia quoted Eko Budi Lelono from the Ministry of Energy and Mineral Resources as saying.

President Joko Widodo visited several disaster sites on Dec. 7 and vowed to relocate at least 2,000 families living near the volcano

Aid efforts are being stepped up, including from the Catholic Church, which is focusing on distributing urgent humanitarian assistance to the survivors.

He said volunteers were distributing food, tents, blankets, drugs and bedding to victims. A mobile kitchen has been set up in Lumajang to provide hot meals for victims and volunteers. “We also brought in doctors and nurses to treat the injured,” he said.

Father Paulus Fajar Ariwiyatno from Mary Queen of Peace Church in Lumajang district said teams were also looking to provide aid in 13 other locations but efforts were being hampered by blocked roads.

Further eruptions since Dec. 4 have also hindered efforts as pyroclastic clouds of ash, rock and volcanic gases have posed an even greater threat than the lava spewing from the volcano.

President Joko Widodo visited several disaster sites on Dec. 7 and vowed to relocate at least 2,000 families living near the volcano.

Meanwhile, Pope Francis said he was praying for the victims in a Dec. 8 telegram to his apostolic nuncio for Indonesia, Archbishop Piero Pioppo. The pope said he was saddened to learn of the recent loss of life and destruction caused by the eruption.