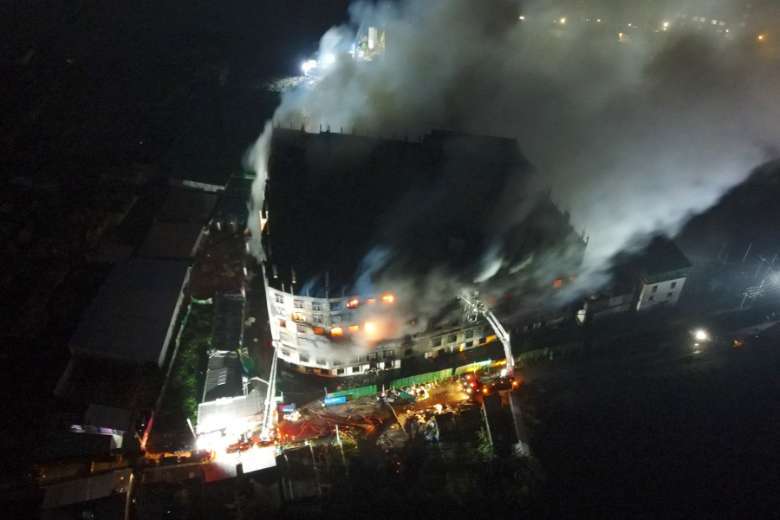 An aerial photo show firefighters trying to extinguish a massive blaze that broke out in a food and beverage factory in Rupganj, central Bangladesh, on July 8. (Photo: AFP)

A fire that tore through a food factory near the Bangladeshi capital killed at least 52 people with others still missing, police said, after bringing out more bodies from the debris.

The blaze broke out in the factory in Rupganj on Thursday afternoon and was still burning nearly 24 hours later. Many of the 30 injured leapt for their lives from upper floors in the complex.

It was unclear how many people were trapped inside, though distraught relatives outside and other factory workers said they feared that others might have not escaped.

Fires are common in Bangladesh due to lax enforcement of safety rules. In February 2019, some 70 people died when an inferno ripped through several Dhaka apartment blocks.

Police and witnesses said the fire broke out at Hashem Food and Beverage factory in Rupganj, an industrial town outside Dhaka, about 5pm on Thursday and was still raging on Friday morning.

At least 30 people were injured including some who jumped from the upper floor after the fire quickly raced through the six-storey factory, police inspector Sheikh Kabirul Islam said.

Police initially said dozens of workers were still missing but later retracted and said they were unsure how many were unaccounted for.

On the third floor, gates on both stairwells were closed. Other colleagues are saying there were 48 people inside. I don't know what happened to them

Firefighters rescued 25 people from the roof of the factory, which produced noodles and drinks.

Mohammad Saiful, a factory worker who escaped the fire, said there were dozens of people inside when the blaze began.

"On the third floor, gates on both stairwells were closed. Other colleagues are saying there were 48 people inside. I don't know what happened to them," he said. Mamun, another worker, said he and another 13 workers ran to the roof after the fire broke out in the ground floor and black smoke covered the whole factory.

"Firefighters brought us down by using rope," he told reporters.

As clouds of smoke billowed from the factory building, hundreds of distraught people gathered outside to find out updates of their relatives.

One of them was Nazrul Islam. "We came here because my niece was not receiving our phone calls for a while. And now the phone is not ringing at all. We are worried," he said.