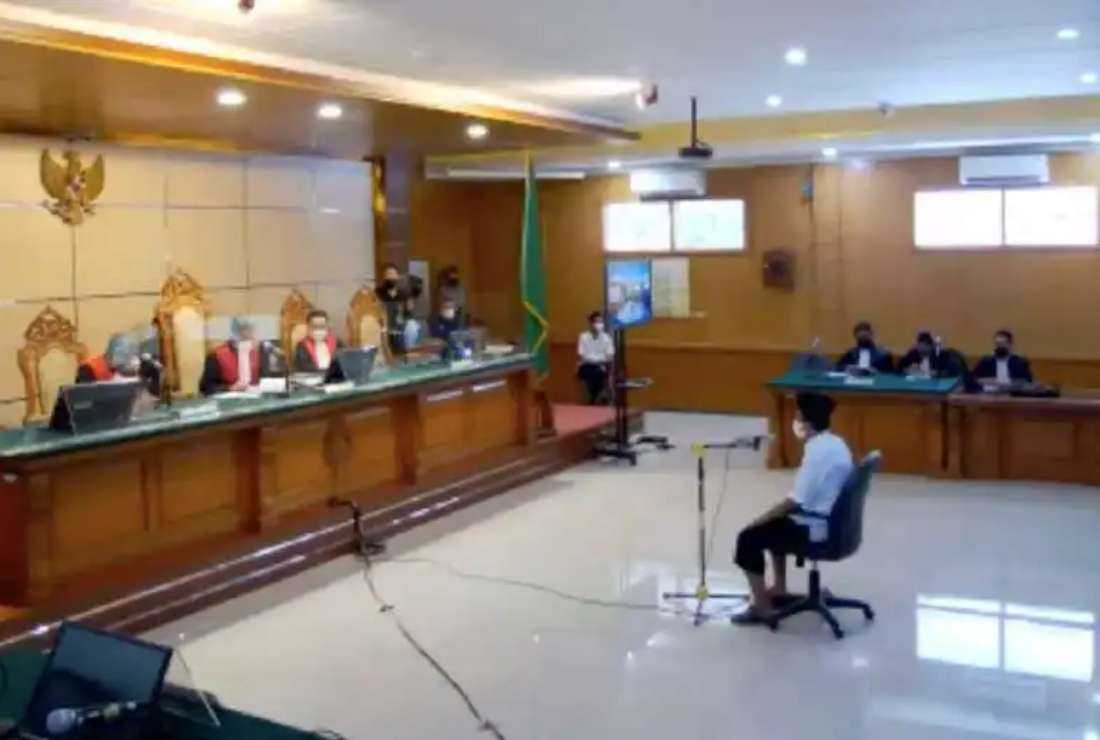 Herry Wirawan, a religious teacher at an Islamic boarding school convicted for raping 13 female students, seen here in the Bandung District Court in February 2022. The Indonesian Supreme Court on Jan. 4 upheld a death sentence in his case as pronounced by the High Court in April last year. (Photo: Bandung District Court’s YouTube channel)

The Indonesian Supreme Court upheld the death sentence for a religious teacher convicted of raping more than a dozen students at an Islamic boarding school in Bandung, the capital of West Java province.

A three-member panel of judges presided by Sri Murwahyuni rejected the appeal of Herry Wirawan who was sentenced to death in April last year by the High Court in Bandung, according to the court’s ruling posted on its website on Jan. 4.

He was awarded life imprisonment by the Bandung District Court in February 2022 for raping 13 students aged 13-16 including eight of whom became pregnant, between 2016 and 2021.

The verdict was changed to the death sentence following an appeal from the prosecution team representing the alleged victims. The accused later appealed against the sentence.

While cases of sexual abuse and rape by teachers are not uncommon in Indonesia, the gravity of Wirawan’s crimes sparked widespread attention over sexual abuse in religious schools in the country.

Yudi Kurnia, the victims’ lawyer told UCA News on Jan. 4 that the Supreme Court’s ruling “shows that the state is really there to protect children of this nation.”

“On behalf of the victims, I welcome the Supreme Court’s ruling. It is a right decision, I think, because it brings justice which has been sought so far by the victims and their families,” he said.

“The victims and their families were very disappointed when the Bandung District Court sentenced the defendant to life in prison. They wanted the death sentence” he added.

Local media reported that the pregnant victims have given birth and are taken care of by their parents.

Lawyer Kurina said the victims have now recovered from the psychological trauma and added that he will continue to fight if the convict files another appeal against the sentence.

"The chance is very small. If he does so, however, I will continue to fight,” he said.

Based on the existing legal system, Wirawan still has one last legal avenue by requesting a judicial review as long as he has new evidence to prove leniency.

Ira Margaretha Mambo, the defendant’s lawyer, claimed that she has not yet received an official statement from the Supreme Court.

“We will ask the Bandung District Court about it. Once we get the official statement, we will give our comments and [issue] a press release,” she said, as quoted by jpnn.com.

The death sentence against the convict “aims to end the crime and to serve as a deterrent effect," says Azas Tigor Nainggolan, an activist from the legal and human rights desk at the Indonesian Bishops’ Conference’s Commission for Justice, Peace and Pastoral for Migrant-Itinerant People.

“Wirawan’s case is gross. All sexual crimes are gross. That is why the judges want the death penalty so that the two goals can be reached,” he told UCA News.

He, however, acknowledged that only a few defendants charged with sexual crimes received such severe punishment.

“So, there must be consistency among judges. I think the Supreme Court can issue an exhortation to all judges to pay serious attention to this,” he said.

Asserting the Catholic Church’s stance against the death penalty, he suggested that sexual predators should be sentenced to life in prison without any clemency.

“Based on the newly approved Criminal Code, if a death row convict has not been executed yet after 10-15 years and is well behaved while staying behind bars, their sentence can be reduced to life imprisonment. And if they are well-behaved while staying behind bars, the life imprisonment can be reduced as well. As a result, the two goals can never be reached,” he said.

The death sentence for child rape is “a firm stance of the judges,” noted Waryono Abdul Ghafur, director of Early Education and Islamic Boarding School at the Religious Affairs Ministry’s Directorate General for Muslim Community Guidance.

“It is hoped that the (death) sentence given to Herry Wirawan will become an important lesson in order to prevent similar crimes from happening again,” he said in a statement.

The Ministry of Women’s Empowerment and Child Protection recorded 8,730 children as victims of sexual violence in 2021.