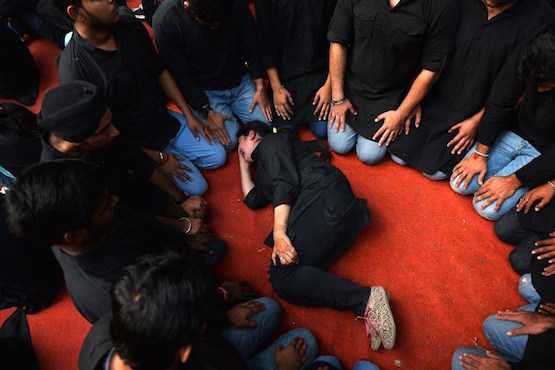 Performers act out an acid attack in New Delhi on Dec. 12, 2014 as part of a campaign to highlight the rights of survivors of acid attacks. A court in India sentenced a 25-year-old man to death on Sept. 8 for murdering a young woman in an acid attack. (Photo by AFP)

An Indian court sentencing to death a man convicted of murdering a young woman who he attacked with acid has evoked mixed responses among church leaders and activists.

The Mumbai High Court Sept. 8 gave the death penalty to 25-year-old Ankur Panwar who threw acid on his neighbor Preeti Rathi, 23, when she got down from a train with her family in Mumbai in May, 2013. Rathi died a month later from her injuries.

Panwar attacked Rathi after she refused his marriage proposal, instead accepting a job in the Indian navy as a nurse.

"While acknowledging the severity of crime and with utmost respect for the judiciary, we at Catholic Church have always taken the moral stand that it is against capital punishment," said Father Nigel Barrett, spokesperson of Bombay Archdiocese.

"Life is a gift from God and must be respected always," said Father Barrett.

Echoing the same views, Charity Sister Magdalene D'Silva, said that Panwar should be given a chance for repentance, counseling and rehabilitation.

"There are so many convicts whose lives are reformed. Also, being the Year of Mercy and according to Catholic teaching, mercy comes before justice," Sister D'Silva said.

However, there have been some who have welcomed the verdict.

Social Activist Aftab Siddique told ucanews.com that, "the agony of the affected family is indispensable. No kind of support can console her family."

India has voted twice against United Nations General Assembly resolution calling for a moratorium on the death penalty.

Acid attacks have been reported globally, but they are particularly prominent in South Asian countries. In India, most acid attack victims are females.