Death of teenager reveals how power is abused in China

When it comes to high ranking officials, there is no rule of law 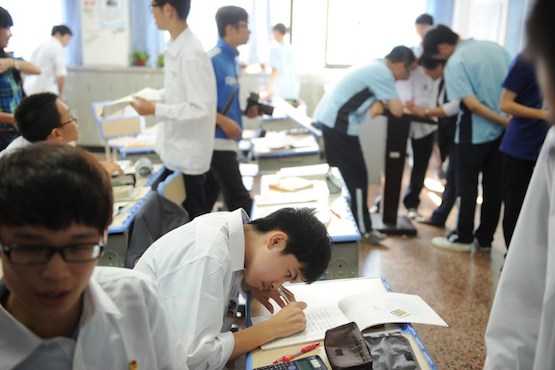 A file image of schoolboys at a high school in Shanghai. The suspicious death of a teenage schoolboy in Luzhou city has resulted in protests against the local government. Many of the protesters believe he was beaten to death by sons of local officials. (Photo by Peter Parks/AFP)

By Shanren, penname of a priest in Tianjin

Taohua, a layman in my parish, recently sent me a short video clip. It was a about a 14-year-old high school student, Zhao Xin, who had been allegedly bullied to death at a school in Luzhou county in southwestern Sichuan province in April.

Zhao's body was found on the ground outside the student dormitory. A large area of his body was bruised. His arms and legs were broken. The school authority and the police quickly certified that Zhao committed suicide by jumping from the dormitory but Zhao's mother doubted it.

However, there was a video clip of Zhao being beaten by several young people. It was shot and posted on internet by the perpetrators. Although it was removed quickly, many people watched it and shared it.

Zhao's death aroused anger in Luzhou. The news spread across the country and even drew attentions from foreign media. Zhao's family and people from the county protested but were met with a government crackdown.

I was surprised that Taohua sent this video to me. Perhaps, he felt strange that I have not written yet about the tragedy and thus he took the initiative to alert me this time.

Taohua is a few years younger than me. Every time I write about social injustice, he would entreat me: "You should not just focus on the bad news and deliberately ignore so many brilliant achievements on China's infrastructure developments."

"Even if the government has done something wrong, would not it's merits outweigh its faults?" he said.

Not long ago some so-called patriots mobbed the Korean-run Lotte shopping malls in China. They were angry about South Korea setting up the THAAD (Terminal High Altitude Area Defense system) missiles and thought it was an infringement on China's security. However, I was surprised they did not care about North Korea firing bombs randomly at China's doorway.

In the bully incident, Taohua thought it was due to the weakness of human beings. A violent tendency that must be checked by laws and the police.

However, he may have missed the point that justice is implemented and executed by humans. When there is no democracy, the common people are always nobodies.

The sense of helplessness of the ordinary Chinese, when being abused by those with power, is like having a terminal illness. In despair and pain, they can only pray for hope and peace.

Lots of people commit suicide every day in China. However, they have not had the same impact as Zhao's death. The news spread so quickly and there were numerous responses from bloggers across China. The Luzhou government deleted all the related internet posts and arrested people. More ridiculously, it announced it was suspending electricity in the area.

There were rumors that government officials were eager to reconcile with Zhao's family. But the autopsy report still maintained the cause of death was suicide. However, it could not convince the people in Luzhou.

Our government has no fear even when it meets angry protests. So, some people teased the Luzhou government and said they were unskillful in dealing with the crisis.

Frankly speaking, Zhao's case was uncomplicated. It was just like the tragic death of Lei Yang, Xu Chunhe, Zhou Xiuyun and many others. None of them were complicated. They died because the authorities abused their power and knowingly violated the law. The authority in Luzhou was anxious to cover up the case leading to distrust.

Zhao's mother might have been asked or forced to accept compensation and reach a settlement with the government, as is a customary practice in China.

However, as the Bible says, "Let our word be 'Yes, yes' or 'No, no.' Anything more that this comes from the evil one." When there is no truth, there will be no justice.

People in Luzhou need to know the truth; so does the world. This truth cannot be the truth that the government wants. It should be the truth of what really happened even if it means a bloody and hard story. Only with truth can those who survive continue with their lives.

Zhao was only 14. I could not keep silent or ignore him. Not after seeing the smile on his face.

Like most people, I do not know the exact truth. But I am eager to know it and long for justice for Zhao Xin and society.