Death not imminent for Philippine woman imprisoned in Indonesia 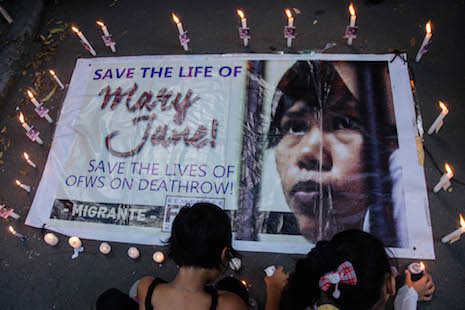 A poster hangs outside the Indonesian embassy in Manilla last April calling on authorities to spare the life of Mary Jane Veloso, a Philippine woman facing the death penalty in Indonesia over a drug conviction. (Photo by Mark Saludes)

By Joe Torres and Mark Saludes in Manila

A Filipino woman on Indonesia's death row for drug smuggling does not face imminent execution even after the Indonesian government announced on Jan. 4 that it will continue to execute drug dealers.

"As far as we know, it is still status quo," said Edre Olalia, lawyer of Mary Jane Veloso, who was given a stay of execution last April pending legal proceedings in the Philippines.

Olalia said the Indonesian government's announcement "refers to a general policy" about new executions in general.

Indonesia's National Narcotics Agency has announced that of the 55 drug convicts on death row in Indonesia, 14 are awaiting execution.

Online news source Kompas quoted Attorney General Muhammad Prasetyo as saying that executions will be prioritized for those imprisoned for narcotic offenses whose appeals have passed all legal processes.

Only Veloso and Frenchman Serge Areski Atlaoui have so far completed legal efforts to appeal their case.

Philippine Foreign Affairs spokesman Charles Jose, however, said reports that Veloso will be executed were "inaccurate and unreliable."

He said the Phillipine embassy in Jakarta has not received any official notification from the Indonesian government.

Meanwhile, Olalia said the multiple cases against Veloso's illegal recruiters in the Philippines "are proceeding not swiftly as we wish."

"But they are moving despite a cornucopia of dilatory legal acrobatics by the said recruiters through their lawyers," the lawyer said.

Veloso has not testified yet or submitted her testimony because the formal trial against her recruiters has not yet started.

The Philippine Court of Appeals on Jan. 6 denied the plea of Veloso's recruiters to stop their trial before a regional trial court in the province of Nueva Ecija.

"We should continue to be on guard so [Veloso] can already come home sooner than later," said Olalia.

Veloso was arrested in Indonesia in April 2010 for carrying 2.6 kilograms of heroin. She was sentenced to death in October of the same year but was spared due to a moratorium on the death penalty enacted by then president, Susilo Bambang Yudhoyono.

President Joko Widodo gave Veloso a reprieve for her to act as a witness in the trials of her alleged traffickers in the Philippines.

Veloso will be celebrating her 31st birthday on Jan. 10.