Death and bounties in the time of Duterte

'Wanted' posters targeting rights workers, peasant leaders and tribal elders are cropping up in the Philippines 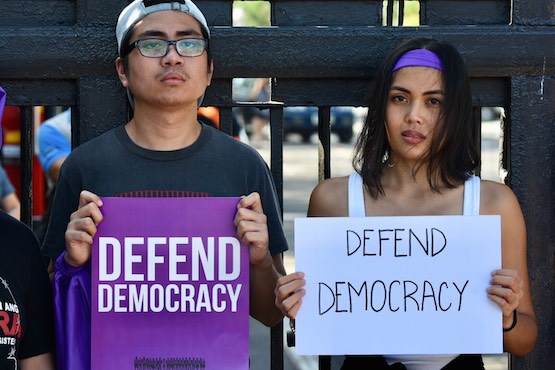 Youth activists join a demonstration in Manila to protest against what they describe as threats to democracy, including attacks on activists and tribal people who oppose government projects in ancestral lands. (Photo by Angie de Silva)

Philippine President Rodrigo Duterte's threats against activists and rights workers who are critical of his administration represent crimes against humanity.

The former mayor spent the first year and a half of his presidency presiding over a bloodbath caused by his war on drugs in Manila and other major urban centers.

Duterte's crackdown on suspected members of narcotics gangs has already killed more than 10,000 mostly poor drug addicts and street pushers. The campaign is defined by a sense of contempt for due legal process.

A massive round up of victims has led to surrenders and forced confessions, and pressured community leaders to cough up lists of suspects.

Police operations have also offered dubious statistics given their lack of detail or transparency.

They maintain that at least 4,000 people, including children who allegedly fought it out with authorities, have been killed.

However this claims sounds as outrageous as the government's refusal to surrender the records of these police operations to the Commission on Human Rights, or even the Supreme Court.

Twice as many have died in what police describe as vigilante killings, even though some of the casualties have been blamed on the authorities.

As the mastermind of this state-sanctioned assault, Duterte then launched calibrated attacks against prominent figures from underground movements including leftist agitators despite earlier moves to court them.

In November 2017, the Philippine leader scuttled peace talks with the National Democratic Front, an umbrella alliance of underground revolutionary groups including the Communist Party of the Philippines and its armed wing, the New People's Army.

Duterte declared these groups to be terrorist organizations. He threatened legal activist groups with the same treatment.

In December, soldiers killed a tribal chieftain and nine other members of his clan in South Cotabato province, emptying a village that had fought to recover ancestral lands from a plantation developer.

In Surigao del Sur province, the military blocked aid to more than a thousand tribal students and their families as mining firms scurried to fast-track operating permits in a thriving agricultural community.

Elsewhere in Mindanao, bombs have fallen on villages. "Wanted" posters have appeared in cities targeting rights workers, peasant leaders and indigenous elders — all known activists who have complied with the law.

Duterte then ordered indigenous tribes to vacate their hamlets or get caught in his all-out war against communist rebels.

Violating the country's constitution and other laws recognizing self-determination over ancestral domains, the president announced he would be overseeing the "development" of the country's remaining pristine areas. Protesters push a giant effigy depicting Philippine President Rodrigo Duterte as they march toward Malacanang palace during celebration of International Women's Day in Manila on March 8. (Photo by Ted Aljibe/AFP)

He assigned himself arbiter of investment opportunities in tribal lands, throwing out scraps like vocational education and conscription into paramilitary units for those willing to be penned in relocation sites.

In a bid to break resistance among the tribes, he offered bounties of US$2,000 for suspected rebels, many of whom were tribal people.

Duterte greeted March, dubbed International Women's Month, with an order for soldiers to shoot suspected female guerrillas "in their vaginas."

His government has also filed in court a petition to formally carry out its program against "terrorists," presenting a list of more than 600 people.

In many ways, the new anti-terror program hews to his war on drugs.

The president's crackdown on narcotics unfolded with what community development worker and writer Nash Tysman sees as a system of tyranny based on a blacklist of names.

The president carries around with him a thick sheaf of paper, which he calls a matrix of private individuals and government officials involved in the narcotics trade.

He regularly blurts out names — an act that often precedes more killings.

Police have scant evidence to bolster the president's allegations. In several interviews, law enforcement officials admitted to being left in the dark about Duterte's data.

But the tyranny of that list seeped down into police units as more than a million suspected drug peddlers surrendered, only to find out no redress measure existed for those erroneously included in what had then morphed into an order of battle.

Human rights lawyer Neri Colmenares has accused Duterte of orchestrating a deliberate and systematic program of vilification to pave the way for extra-judicial killings.

Now that strategy is poised at activists, with a list that includes the U.N. special rapporteur for indigenous peoples Victoria Tauli Corpuz.

But the strangest additions may be the names of long-retired rebels — even those who have forged peace pacts with previous administrations — deceased rebels, people who have languished in jail for years, at least one journalist, and well-known leaders of the communist underground.

The vilification of activists has been going on for months now. Duterte, in typical disdain for the law, issues the same promises he gave to spur enforcers of his drug war — the more you kill, the more I will reward you.

He issues the same threat of macabre, unusual and cruel punishment sans due process.

His list, padded by dozens of John and Jane Doe's, ensures blanket coverage for new horrors aimed at terrorizing a large swathe of populations, this time in the name of peace and development.

Duterte's policies and actions are clear signs of state terror, according to Peter Murphy, secretary general of the International Coalition for Human Rights in the Philippines.

"We're talking of elements of crimes against humanity, to which the international community is responsive," he said, citing the military's efforts "to block access and isolate target communities, stopping help from reaching them and stopping justice from being introduced for them."

No wonder Duterte is trying to place himself beyond the reach of the International Criminal Court by withdrawing recognition for the Rome Statute ratified by the Philippine government.