At least 90 people are reported dead across the subcontinent, according to a study by World Weather Attribution 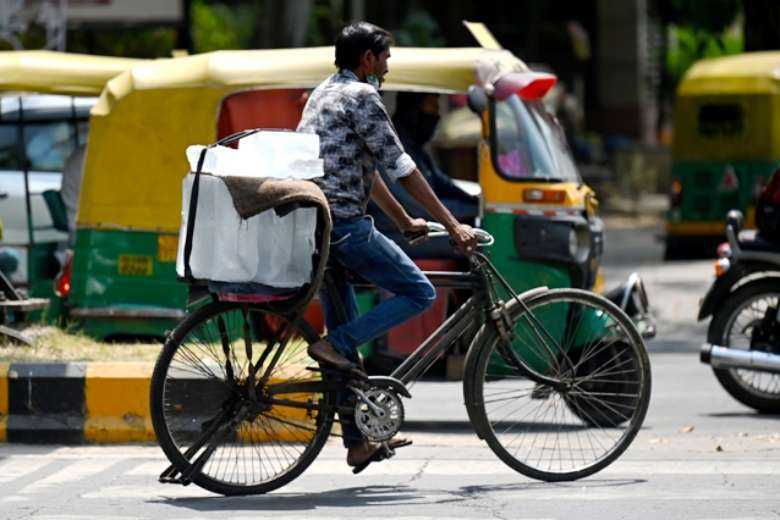 An Indian delivery man transports ice blocks on his bicycle amid rising temperatures in New Delhi on April 11. (Photo: AFP)

A Catholic diocese in Rajasthan state of northwest India has erected a temporary shelter to protect people from a deadly heatwave causing widespread suffering on the subcontinent.

The shelter,  made of thick layers of cloth that can accommodate around 50 people, was erected near a bus stand. A water cooler keeps the area cool, allowing men, women and children relative comfort to just sit or have their traditional meals made of flattened bread, vegetables and buttermilk.

“This is our humble effort to provide relief to the common man,” Father Vishal Raymond, social work director of Ajmer Diocese, told UCA News on May 23.

Temperatures have been rising above 48 degrees Celsius, exposing people to sun stroke and other health problems, the priest added. The shelter was erected on May 17 and will stay until at least the middle of June when rains are expected to arrive.

The past few months have been the hottest in India since temperature records began 122 years ago. Across the desert in Rajasthan, neighboring Pakistan has also seen record temperatures.

On May 15, two locations — Mungeshpur station and Najafgarh — near the national capital New Delhi recorded temperatures above 49C.

At least 90 people were reported dead due to the heatwave across India and Pakistan, according to the latest study by climate scientists and published by World Weather Attribution (WWA).

Father Raymond said the extreme heatwave had disrupted normal life in many parts of the desert state. People cannot venture out in the day even for work and the poorest of people were the worst sufferers due to loss of income, he said.

A water shortage is another major issue reported from both urban centers and villages closer to the desert, affecting both humans and animals.

“We have suspended all fieldwork between 11 am to 4 pm to provide some respite to our staff,” the priest said.

The situation is equally bad across the northern Indian states of Uttar Pradesh, Punjab and Haryana along with Madhya Pradesh in central India.

“We cannot think of venturing out between 10am to 4pm,” said Father Jaison Manuel, social work director of Gorakhpur Diocese in Uttar Pradesh.

“Volunteers and workers associated with the diocese to help children in distress were actively involved in distributing water to child passengers at the nearest railway station and bus stand,” said Father Manuel. “Of course, we don’t refuse water to others, but our priority is children.”

Father Johnson Francis, social work director of Jhansi Diocese in Uttar Pradesh, said it was impossible to move outside with temperatures hovering between 46C and 48C.

Some parts of the western states of Gujarat and Maharashtra, plus the southern states of Tamil Nadu and Andhra Pradesh, have also witnessed unusually high temperatures.

But neither the federal nor provincial governments have released any data on human casualties due to the heat wave.