Thai army rangers walk through the scene of a roadside bomb which killed four army rangers in the restive Southern Thai province of Pattani on Sept. 22. (Photo by Tuwaedaniya Meringing/AFP)

The bomb blast was so powerful that it ripped in half the pickup truck carrying a group of Thai soldiers, killing four of them and wounding five others and a civilian.

The insurgents had taken advantage of road construction in Sai Buri district in Pattani Province and planted a 100-kilogram bomb inside drainage pipes at a construction site. Two of the injured died in a Pattani hospital the following day.

Pattani is one of the three Muslim-majority provinces in Thailand's Deep South where nearly 7,000 lives have been claimed since a violent insurgency started in January 2004.

What upset the Thai officials over the Sept. 22 bombing, like many other previous attacks, was the refusal of locals to come forward with information. Popular support for the separatist militants at the grassroots level remains high.

A week earlier, on Sept. 14, insurgents carried out a double bomb attack in Yala's Yaha district, killing two security officials. At least 18 others were wounded by the blast.

Most of the victims attack were members of an army bomb squad who were on their way to inspect a power pole that was brought down the night before by an explosive device. It was a ploy luring them to the scene where the much bigger second bomb awaited them.

A month earlier, on Aug. 16, there was the carjacking of seven pickup trucks from a local second-hand dealer. The vehicles were intended to be used as car bombs.

When four hostages tried to escape, one of their abductors pulled out a gun and fired at them. One of the hostages died in hospital later in the day, while another survived with a bullet wound to the shoulder. The three survivors went straight to the police and soon after, the entire security apparatus in the region went on high alert.

The operatives scaled back their goals. Only two of the seven vehicles were used as car bombs. One hit an army vehicle and another was detonated at an apartment building for police officers.

Indeed, it has not been a good period for the Thai security apparatus. The beating that they have been taking has cast a dark cloud over an agreement that the Thai negotiators reached with the Barisan Revolusi Nasional (BRN). 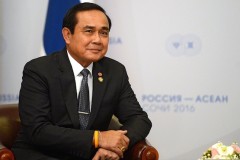 The Safety Zone refers to a provincial district where a ceasefire is to be observed. The BRN — the dominant insurgent organisation that controls virtually all militants on the ground — is not part of MARA Patani.

The verbal promise from the BRN, which included not sabotaging the Thailand-MARA Patani talks, was greatly welcomed by Bangkok and Kuala Lumpur.

But BRN militants on the ground said there is plenty of bad blood between them and MARA Patani. BRN militants suggested in an interview with me on Sept. 30 that the Safety Zone project will not have smooth sailing. They insisted that they should be the ones who Bangkok should be negotiating with, not MARA Patani. Their reasoning was based on the fact that they control the militants on the ground.

Bangkok has taken the warning seriously and decided to postpone the announcement of which district in the Deep South would be designated as a safety zone.

Discussions among BRN cadres on the ground and abroad over the past month have centered on the cost-benefit ratio behind the continuation of discrediting Bangkok and MARA Patani.

Acknowledging the bad blood stemming from competition between them and MARA Patani, some mid-ranking progressive BRN members are calling on the movement to move on from tit-for-tat attacks that may discredit the official dialogue process between the Thai government and MARA Patani but does little to advance BRN's cause and agenda.

The BRN source said his militant group is focusing more on how to engage the global community to learn about international norms and best practices. He also said understanding among the BRN about how to conduct proper negotiations is lacking and added that their negotiators will not come to the table until they are properly trained.

A Thai Army forensic team member inspects the site of a roadside bomb blast that targeted a Thai army patrol in southern Thailand's Pattani province on June 19. Six soldiers were killed by the explosion. (Photo by Tuwaedaniya Meringing/AFP)

Peace talk proposals were initiated by the government of Yingluck Shinawatra in Feb. 28, 2013. The initiative came across as a big leap of faith by many observers. For the BRN, it was more like a hoax. Yingluck was ousted from power in May 2014 and her peace initiative came to a standstill.

The Thai junta announced in December 2014 that talks with the Patanni Malay rebels with Malaysian facilitation would continue. In August 2015, MARA Patani was introduced to the public at a press conference in Kuala Lumpur. Like Yingluck's peace initiative, this one didn't have the endorsement or participation of BRN either.

Thai officials said they were fully aware that members in MARA Patani did not control the insurgents but justified the dialogue with the umbrella organisation by saying they were hopeful the BRN would eventually join in.

Like the Yingluck initiative, the junta had also taken a big leap of faith, hoping that one day, that Malay Muslim residents at the grassroots level would become tired of the violence and end their support for the BRN.

But more than four years after Yingluck launched her peace initiative, there is no indication that such support for BRN has diminished or that the intensity of their attacks will lessen.

The BRN have said they will come to the table only when they are ready, which means proper training and a better understanding of the international norms for members of their political wing.

The militant group said the ball is in Thailand's court and it is up to the generals in Bangkok to decide whether they are willing to internationalize the peace initiative in exchange for getting their representatives to the talk.

But so far, Thailand has not given any indication that it is willing to permit foreign assistance, much less make any concession to the BRN or the Malays of Patani.

"The junta is very worried about their legacy," said one Thai security officer who monitors the situation closely. "They don't want to be remembered as the guy who gave away Patani," added the source, referring to the contested Malay historical homeland that is now part of Thailand's southernmost provinces.

Don Pathan is an independent security analyst based in Thailand. He is also a founding member of Patani Forum, a civil society organization dedicated to promoting critical discussion on the conflict in Thailand's Far South.