Day one: pope hops on a bus and stops to pay his hotel bill

The first few hours of the papacy began in a remarkably down-to-earth way. 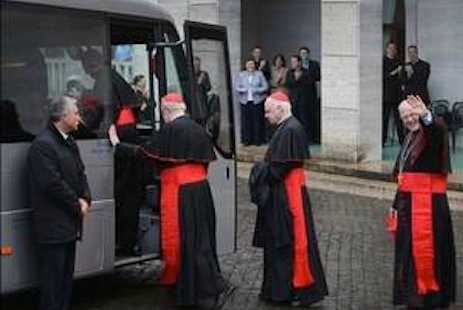 Like many Latin American Catholics, Francis has a particular devotion to the Virgin Mary, and his visit to the St. Mary Major basilica was a reflection of that. Laying flowers on the altar, he then prayed before a Byzantine icon of Mary and the infant Jesus.

"He has a great devotion to this icon of Mary, and every time he comes from Argentina he visits this basilica," said the Rev. Elio Montenero, who was present for the pope's arrival. "We were surprised today because he did not announce his visit."

Francis himself had foreshadowed the visit, telling the 100,000 people packed into rain-soaked St. Peter's Square after his election that he intended to pray to the Madonna "that she may watch over all of Rome."

The new pope, known for his work with the poor in Buenos Aires' slums, had charmed the crowd when he emerged on the loggia and greeted them with a simple and familiar: "Brothers and sisters, good evening."

On Thursday, members of his flock were charmed again when Francis stopped by the Vatican-owned residence where he stayed before the conclave to pick up his luggage. But that wasn't the only reason he made the detour.

"He wanted to thank the personnel, people who work in this house," said the Rev. Pawel Rytel-Andrianek, a guest at the residence. "He greeted them one by one, no rush, the whole staff, one by one."

"People say that he never in these 20 years asked for a (Vatican) car," Rytel-Andrianek said. "Even when he went to the conclave with a priest from his diocese, he just walked out to the main road, picked up a taxi and went to the conclave. So very simple for a future pope."

Francis displayed that same sense of humility immediately after his election, spurning the throne on an elevated platform that was brought out for him to receive the cardinals' pledges of obedience, said Cardinal Timothy Dolan of New York.

"He met with us on our own level," Dolan said.

Later, he traveled by bus back to the hotel along with the other cardinals, refusing the special sedan and security detail that he was offered.

Francis, said U.S. Cardinal Donald Wuerl, has signaled his adherence to a "Gospel of simplicity."

"He is by all accounts a very gentle but firm, very loving but fearless, a very pastoral and caring person ideal for the challenges today," Wuerl said.

"He's just a very loving, wonderful guy. We just came to appreciate the tremendous gifts he has. He's much beloved in his diocese in Argentina. He has a great pastoral history of serving people," Collins said in a telephone interview.

And he has a sense of humor.

During dinner after his election on Wednesday, the cardinals toasted him, Dolan said. "Then he toasted us and said, 'May God forgive you for what you've done.'"