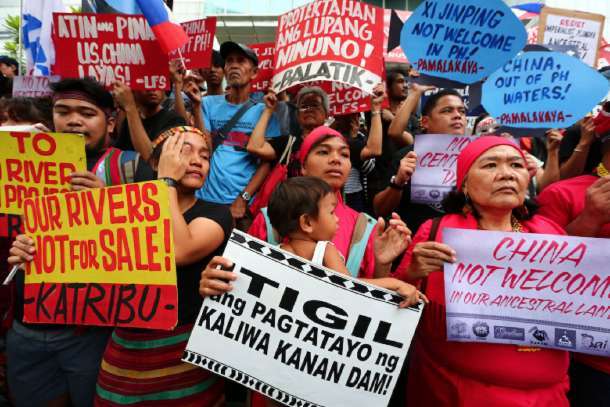 Indigenous people join a protest in Manila in this file photo to show their opposition to the building of the Kaliwa Dam on their ancestral land. (Photo: Jire Carreon)

What is the Kaliwa Dam project? Manila’s Metropolitan Waterworks and Sewerage System claims that the project is a new water source to meet increasing water demand through the construction of a dam for its area’s domestic water supply.

Located in Quezon province, the project is costing 12.189 billion pesos sourced from the Official Development Assistance.

Unimplemented by previous administrations, the Kaliwa Dam is being championed by the Philippine government. In a speech in Digos in Davao del Sur province in December 2019, President Rodrigo Duterte pushed for the construction of this China-funded project in what he termed as the “last resort” to stabilize Manila’s water supply.

For its devastating consequences on the people, it has met with vehement protests from civil society, with visible opposition from the Catholic Church.

Almost 300 hectares of forest ecosystems in the Sierra Madre will be submerged in water, endangering 126 endemic and endangered plant and wildlife species, thus destroying the biodiversity of that mountain range.

The peaceful Dumagat-Remontados indigenous peoples will be displaced, while their way of life and culture will be devastated.

The contract with the Chinese investors was onerous to the Filipino people for its absence of transparency, and the loan agreement was only made publicly available after civil society demanded full disclosure.  Philippine laws have been violated, while non-destructive and less expensive alternatives are available. Threats to the lives of 100,000 people are imminent due to flooding caused by earthquakes.

The reasons to stop the construction of the Kaliwa Dam urged the Catholic Bishops' Conference of the Philippines (CBCP) to join the Prelature of Infanta and Antipolo Diocese in opposing the project.

In a pastoral letter issued on Ash Wednesday (Feb. 26), the CBCP condemned the project as being against inclusive development. The bishops expressed concern about the devastation it would cause the Dumagat-Remontados indigenous communities of the Sierra Madre mountain range in Quezon and Rizal provinces and the people in the municipalities of Real, Infanta, General Nakar and Tanay.

Asked about the project, Irish Columban priest and environmental advocate in the Philippines, Father John Leydon, said: “It is very destructive of the ecosystem and the lives and culture of the indigenous peoples. It is not necessary. It would be far better and more efficient to fix the leaking pipes in the water system of Manila.”

The first female professor at Ateneo de Manila University, Mary Racelis, stated: “The most often heard exhortations of the growing anti-Kaliwa Dam protests are: ‘Justice for the indigenous peoples of the Sierra Madre and justice for their nurturing environment’.”

That the project should be stopped is based on two issues, Racelis added.

“The first is the destruction of the Sierra Madre environment, which will affect not only the indigenous residents but also thousands of farmers, fishers and workers in Infanta and Laguna de Bay lowlands. Second, Metro Manila residents should be aware that economists find the project financially unviable. To compensate for predictable losses, therefore, the government will likely pass on the added water costs of the dam to Metro Manila households. Other alternatives to the Kaliwa Dam are possible.”

From a human rights lens, the Commission on Human Rights, in a statement dated Nov. 2, 2019, said: “There is no justice in quenching the thirst for water if it is at the expense of destroying communities ... Water is a human right and every Filipino deserves access to a clean and adequate water supply … we urge the government to seriously exhaust viable alternatives such as identifying other location for water dams, the rehabilitation of existing water dams and supporting watershed conservation.”

The Kaliwa Dam project and all its destructive consequences to nature and to the indigenous peoples are an anathema to the integrity of creation that Laudato Si’, the most comprehensive theological foundation of the indivisibility and interdependence between the care for humanity and the care for the earth, is profoundly concerned about.

The encyclical’s paragraph 145 states: "Many intensive forms of environmental exploitation and degradation not only exhaust the resources which provide local communities with their livelihood, but also undo the social structures which, for a long time, shaped cultural identity and their sense of the meaning of life and community. The disappearance of a culture can be just as serious, or even more serious, than the disappearance of a species of plant or animal. The imposition of a dominant lifestyle linked to a single form of production can be just as harmful as the altering of ecosystems."

Paragraph, 146 further states: "In this sense, it is essential to show special care for indigenous communities and their 110 cultural traditions. They are not merely one minority among others, but should be the principal dialogue partners, especially when large projects affecting their land are proposed. For them, land is not a commodity but rather a gift from God and from their ancestors who rest there, a sacred space with which they need to interact if they are to maintain their identity and values. When they remain on their land, they themselves care for it best. Nevertheless, in various parts of the world, pressure is being put on them to abandon their homelands to make room for agricultural or mining projects which are undertaken without regard for the degradation of nature and culture."

One of the loudest voices of protest came from Father Pete Montallana, head of the Save Sierra Madre Network who, in the name of the STOP KALIWA DAM network of organizations and individuals, calls for the cancellation of the project on the grounds of its violation of legal processes, destruction of the area’s rich bio-diversity, its contribution to the climate crisis, its enormous social costs, its risks to people’s lives and its contribution to an onerous unnecessary loan.

As voices and acts of protests increase to stop the project, let us join Pope Francis in his Laudato Si’ message by imploring to God that the hearts “of those who only look for gain at the expense of the poor and the earth” be touched.

This prayer relevantly complements the voices of protest against the destruction of our planet and the disintegration of creation.