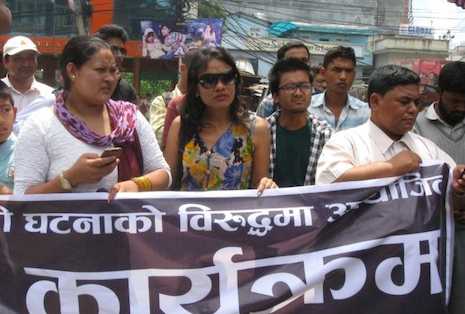 By Mallika Aryal for IPS, Kathmandu

Maya Sarki, a resident of Belbari in eastern Nepal, was returning home one summer evening last year when she was attacked. She was forced down on the ground and her assailant attempted to rape her.

She screamed. Locals came to her rescue and the attempt was thwarted. Sarki recognized the voice of her attacker as that of a neighbur and filed a police complaint.

The next day Sarki was met by a mob, led by her alleged attacker, at the village market. She was called derogatory names, her clothes were torn, and soot was smeared on her face. She was garlanded with shoes, beaten, and paraded around town. After the incident, Sarki fled the village.

In Dailekh in western Nepal, Sushila Nepali, 28, was raped by a local schoolteacher for years. She was forced to abort twice, but got pregnant again and gave birth to two children. Disowned by her family, Nepali has been living on the streets and begging for shelter and food.

Sarki and Nepali are from different parts of the Himalayan nation, but what is common between them is their caste group – both belong to the socially marginalized Dalit community. Sarki’s attacker and Nepali’s rapist were both high caste Hindus.

There are an estimated 22 Dalit communities in Nepal. Researchers and Dalit organizations say they make up 20 percent of the country’s 27 million population. Dalits are considered to be at the bottom of Nepal’s 100 caste and ethnic groups.

They bear a much bigger burden of poverty, with 42 percent Dalits under the poverty line as opposed to 23 percent non-Dalits.

After a long political impasse, Nepal went back to polls in November. After two long months of negotiations, new assembly members are now finally sitting down and writing a new constitution. But experts say even in the new assembly, the Dalit community is the most under-represented, with only 7 percent, or 38, of the 575 Constituent Assembly members being Dalit.

Rajesh Chandra Marasini, program manager at the Jagaran Media Centre, an alliance of Dalit journalists formed to fight caste-based discrimination, worries that Dalit related issues would, once again, not get priority in the new constitution.

“I am concerned that the new Dalit assembly members would take the party line and become a mere physical presence,” he told IPS. “I fear that Dalit advocacy would become an afterthought.”

Nepal’s Civil Code 1854 had legalized the caste system and declared the Dalit community as “untouchable”. In a Hindu hierarchical structure, such a label dictates where Dalits can live, where they can study and where they can socialize.

In 1963, caste-based discrimination was abolished in Nepal and the National Dalit Commission was formed. In 2011, the Caste Based Discrimination and Untouchability Act was passed.

Yet, Dalits continue to be marginalised.

“Violence against the Dalit community is ignored or often goes unreported and unnoticed in Nepal,” said Padam Sundas, chair of Samata Foundation Nepal, a research and advocacy organization that works for the rights of the marginalized community in Nepal.

Dalits are still barred from community activities such as worshipping in same temples as higher caste Nepalis. The higher castes don’t eat the food touched by members of the Dalit community or even use the same community tap that Dalits use for water. And women are the worst affected.

“Dalit women are at the bottom of the caste and gender hierarchy in Nepal,” said Bhakta Bishwokarma, president of the Nepal National Dalit Social Welfare Organisation (NNDSWO), which works to eliminate caste-based discrimination in Nepal.

“Dalit women’s suffering is triple-fold – society discriminates against them because they are women, then they are discriminated against because they belong to the Dalit community, and within their own community they suffer all over again for being women,” Bishwokarma told IPS.