Dalit activists demand the government give them the same rights as enjoyed by their Hindu counterparts in New Delhi, India, on Aug. 10, 2019. (Photo: Bijay Kumar Minj/UCA News)

Police in the northern Indian state of Rajasthan have arrested four men for allegedly thrashing a Dalit man to death.

The brutal incident in which the men were seen pinning down the victim and beating him mercilessly with sticks was filmed and shared on social media by the attackers.

The video also showed one of the men pressing his knee on the victim’s neck as others kept thrashing him. The incident occurred on Oct. 7, police said.

The suspects then dumped the body of the Dalit, identified as Jagdish Meghwal from Prempura village, in front of his house, according to a complaint filed by the victim's father. The victim’s relatives and neighbors staged a protest in the village demanding justice.

Meghwal was said to be in a relationship with a woman from the neighborhood to which her family objected. The police have registered a case of kidnapping and murder against 11 suspects and were on the lookout for those still at large.

Hanumangarh district police said the four arrested were identified as Mukesh Kumar Ode, Dilip Kumar, Sikandar and Hansraj. All have also been booked under the Scheduled Castes and the Scheduled Tribes (Prevention of Atrocities) Act, 1989, which prohibits discrimination, atrocities and hate crimes against Dalits and tribal people.

The incident caused a political storm with Mayawati, Dalit leader of the Bahujan Samaj Party (BSP), accusing the Congress government of the state of failing to stop violence against Dalits.

Balveer Bishnoi, district president of the pro-Hindu Bharatiya Janata Party (BJP), said “the Congress government that talks about giving protection to the Dalits is a complete failure. Law and order in the state have completely collapsed.”

Dalits, or former untouchables, are the lowest in the centuries-old Hindu caste hierarchy and continue to suffer social prejudice and violence.

“The incident shows how much the state administration is serious about protecting the unprivileged people,” Father Vijay Kumar Nayak, secretary of the Indian Catholic bishops’ office for Dalits and lower classes, told UCA News. 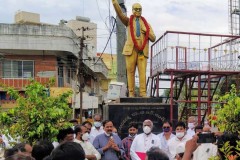 Mukti Prakash Tirkey, editor of a weekly newspaper in New Delhi, said that “there was no fear of the law of the land anymore, especially when it came to violent crimes against the Dalits and other deprived sections of society.”

A Dalit person was subject to a crime every 10 minutes in India during 2020, which recorded a total of 50,291 cases, according to data from India’s National Crime Records Bureau.

Human rights activists have expressed concern that despite a pandemic and the presence of constitutional and legislative safeguards, crimes against them are increasing.