With upcoming elections, it's now or never for these disadvantaged groups to pressure for change Christians and Muslims of Dalit origin protesting in New Delhi on March 12 to demand the government provide them with the social welfare benefits enjoyed by their Hindu counterparts but denied to them. (Photo by Bijay Kumar Minj/ucanews.com)

Hundreds of protesting Dalit Christians and Muslims marched through India’s capital in what they said was a last-ditch effort to gain welfare benefits denied to them.

Some 500 Christians and Muslims who belong to former untouchable communities came together in New Delhi on March 12, two days after the schedule for the April-May general elections were announced.

“The country is in election mood. We want to put across our demands to the government that they consider the rights of our Dalit Christian and Muslim brethren,” said Father Devasagaya Raj, secretary of the Indian bishops’ office for Dalit and socially disadvantaged people at the gathering.

Christians and Muslims of Dalit origin demand that they be given social welfare benefits meant for the uplift of Dalit people. Both communities have been denied these benefits since 1950 because the government says their religions do not follow the caste system.

“Six decades is not a small period [that] we have been suffering this injustice,” said Father Raj. “There is a limit for everything. We have decided that we will support a political party who will put our demands in their election manifesto.”

The 1950 presidential order said only Dalit people of the Hindu religion can enjoy constitutional benefits such as reservations in government jobs, education institutions and financial help with studies. The order was amended twice to include Sikhs in 1956 and Buddhists in 1990.

Both Buddhism and Sikhism also do not approve of the caste system, but they were included after the government accepted their argument that a mere change of religion does not change a person’s socio-economic situation.

But the same argument put forward by Dalit Christians and Muslims has not been successful in having another amendment applied. Christian leaders say political parties fear doing so because it could antagonize their majority Hindu voters.

“Most of the political parties have promised to consider our demand but no one has kept their word when they come to power. We want a firm promise now,” Father Raj said. 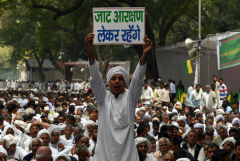 “We have our presence in 22 (of 29 Indian) states. During these election days, we will educate our people about the importance of their vote,” John told ucanews.com.

Sister Anastasia Gill, member of the Delhi Minority Commission, told the gathering that sacrifices would be required for them to reach their goals.

“Let's leave our differences behind,” Sister Gill said. “Not matter if you are Catholic, Christian or Muslim we must unite for this noble cause.”

Hafeez-Ahmed Hawari, National President of All India Jamiat Ul-Hawareen, told the gathering that now is the best time to bargain with politicians.

“Most political parties have taken us for granted, it is time that we become united and raise our voice collectively,” Hawari said. “We should not agree for less than having our demand in their election manifesto.”