Not enough has been done to help the marginalized group, says head of the Indian Catholic bishops' conference Policies will be put in place to help eradicate discriminatory practices against Dalits in the Indian church, said the president of the Indian Catholic bishops' conference during a ceremony that honored community work done by members of this marginalized group.

"Not enough has been done by the church for the dalits in the economic, social and religious spheres. We have a long way to go," said Cardinal Baselios Cleemis of Trivandrum, who presented awards to 72 dalit Christians on May 23 in New Delhi.

The awardees at the event were given a memento and a certificate recognizing their work aimed at empowering Dalit Christians.

The Sanskrit term Dalit means "trampled upon" and denotes the former untouchable castes within Indian society.

One of those awarded was 30-year-old Juliyes from Tamil Nadu in southern India who opened a center for Dalit children to learn English, Mathematics and skill-based training subjects.

She also counsels parents in her community to send their children to school and not to take them along to work.

"I feel honored that I have been considered for an award. Since childhood I have faced discrimination," said Juliyes who comes from the "dhobi" or "washerman" Dalit community. "I was segregated in school, made to sit separately from the children of the upper castes," she said.

At night she used to visit the houses of her classmates from the upper caste to collect their clothes for washing but "I never liked doing that work," she said.

"I do not want these children to go to houses to collect clothes for washing like I did. This is very degrading," Juliyes added. 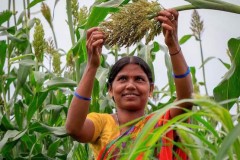 Attendees at the New Delhi event that honored community work in the Dalit community and marked the 125th anniversary of the birth of B.R. Ambedkar, a past champion of Dalit rights. (ucanews.com photo by Ritu Sharma)

"We have to create space in the mainstream society for all people, especially for poor and marginalized. Any effort to deny rights to the Dalits would be fought," said Cardinal Cleemis at the event that also marked the 125th anniversary of the birth of B.R. Ambedkar, one of the architects of the Indian Constitution, who himself was a Dalit.

Cardinal Cleemis promised to formulate policies that will reserve seats for Dalit Christian students in church-run educational institutions to help eradicate discriminatory practices within the church.

Policies will also aim to promote Dalit leadership in the church and in general society as well.

The cardinal's promises come against the background of allegations of Dalit discrimination within the church.

A group of Dalit Christians, led by the Dalit Christian Liberation Movement, filed a complaint with the UN in June accusing the Vatican and the Indian church of not doing enough to curb discrimination against the community.

The complaint accused church leadership of caste-based discrimination in "spiritual, educational and administrative places" of the church.

Father A.X.J. Bosco, who works for Dalit rights, told ucanews.com that despite the high percentage of Dalit Christians in the country, of the 171 bishops in India, only 10 are Dalits.

The caste system in India is so deeply rooted that even Christianity cannot with stand it, he said.

"There is lot of resistance simply because the majority of bishops, priests and nuns are from the higher caste," Father Bosco said.

However, the Dalit Christian Liberation Movement expressed doubts over the bishops' policy.

"Without enforcing reservation and representation to Dalits ... the policy will remain a mere show piece or a make-believe document," it said in a statement.