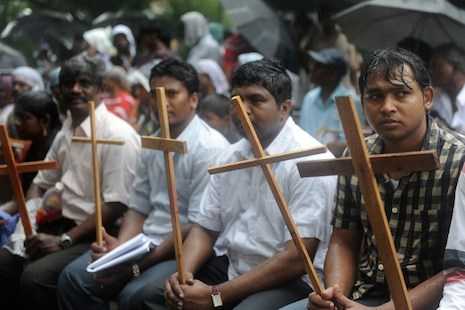 Christian Dalits in India filed a complaint on Tuesday with the United Nations accusing the Holy See of not doing enough to curb discrimination faced by “untouchables” within the Catholic Church.

A delegation of 22 people from the Dalit Christian Liberation Movement (DCLM) and Viduthalai Tamil Puligal Katchi (a collective of human rights activists) submitted the complaint at the UN Information Centre for India and Bhutan in Delhi.

“We have submitted seven copies of the complaint to Rajeev Chandran, assistant director of the UN Centre in New Delhi addressed to UN Secretary General Ban Ki-moon and different human rights organizations,” Mary John, president of the DCLM, told ucanews.com.

The complaint accuses the Vatican and the Indian Catholic Church leadership of caste-based discrimination “by way of allowing it directly and indirectly in their spiritual, educational and administrative places”.

The delegation asked the UN and other organizations to urge the Holy See to eradicate the caste discriminatory practices and to withdraw the Permanent Observer position of the Holy See in the UN if the Vatican does not take the necessary steps.

“The discrimination against Dalit Christians in the Catholic Church is a human rights issue and it would be right if we approach the UN to find a solution to it,” John said.

While Dalit Christians form 70 percent of the total Catholic population in India, said John, their representation in the Church leadership is only 4-5 percent.

He added that Dalits are not recruited for the priesthood and are rarely permitted to be appointed as bishops.

Out of about 200 active bishops in India, only nine are from the Dalit community.

“We have raised our voice time and again to end this practice in the Indian Church, but our pleas have been falling on deaf ears,” he added.

The Dalit Christians also blamed the top bishops’ body in India — the Catholic Bishops’ Conference of India (CBCI) — for not pursuing the issue with the Holy See.

“They do not take our case seriously to the Vatican. The CBCI has come out with declarations terming caste-ism as [a] sin but they themselves are practicing it,” John said.

However, Fr Joseph Chinnayyan, CBCI deputy secretary general, told ucanews.com that the organization has never received any complaint of discrimination against Dalits in the Catholic Church in the past.

He said that as far as the Dalit Christians’ complaint about the issue to the UN is concerned, “we are not aware of any such complaint and will only respond once we receive any communication about it”.