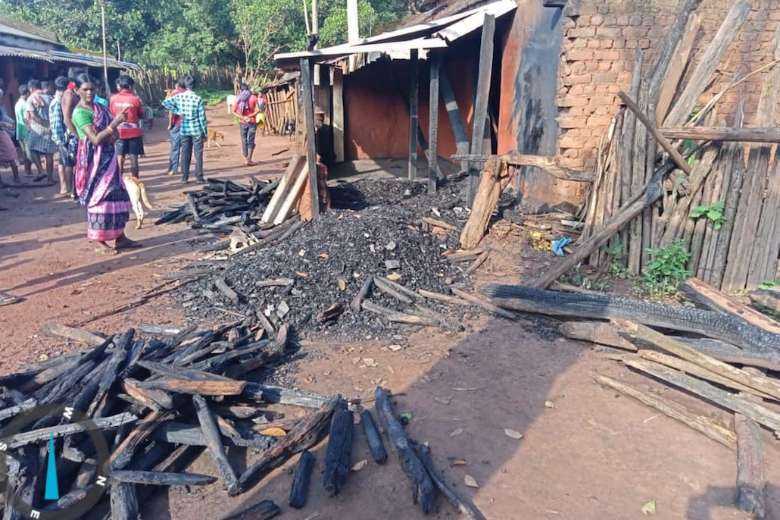 A Dalit Christian family’s house was burned down by Hindu activists in Lodamila village of Odisha’s Kandhamal district on Sept. 22. (Photo supplied)

Dalit Christian families are living in fear in the eastern Indian state of Odisha after being ostracized by Hindu activists for their faith.

The five families were chased out of Lodamila village in Kandhamal district and told that they could only return if they renounced their religion.

The Christians say they were manhandled and abused before fleeing, while one family later had their house burned to the ground.

The Christians, who had been living among 45 Hindu families in Lodamila, are staying 12 kilometers away from the village in a bamboo and grass house near a forest.

Father Dibakar Parichha, an official of Cuttack-Bhubaneswar Archdiocese, told UCA News that the Christians are in “a state of shock and fear for their lives.”

He said the Christians had twice tried to file a first information report at the district police station but police were trying to avoid accepting their case.

We are with the victims, hope to bring justice to the poor and downtrodden and will do whatever we can

“Unfortunately, the victims are still running from pillar to post to register their case in their own land. We are with the victims, hope to bring justice to the poor and downtrodden and will do whatever we can,” said Father Parichha.

“The Hindu activists have told the Christian families that if they give up their religion they can return to the village and live as others live.”

Father Purushottam Nayak, another priest of the archdiocese, told UCA News that Christian families living with Hindu villagers had no problem until anti-Christian riots erupted in Kandhamal in 2008.

He said the families were chased away from Lodamila on Sept. 17 after being barred from accessing water from the community well and a pond. They were also prohibited from grazing cattle and excluded from social gatherings.

After the Christian families approached the police in Balliguda town to file a complaint, the police asked them to compromise, the priest said.

After the Christians left the village, Hindus burned down the house of one Christian family on Sept. 22.

“A similar incident was reported in June when Christians in Sikapai village of Rayagada district were chased away for their faith in Christianity. The case is still pending in court,” said Father Nayak.

The unabated violence that continued for seven weeks killed some 100 people, rendered 56,000 homeless and destroyed 6,000 houses and 300 churches

One of the worst anti-Christian riots in India’s history started in Kandhamal on Aug. 23, 2008, when Hindu leader Swami Laxmanananda Saraswati was shot dead by Maoists as Hindus were celebrating Janmashtami, the birth of Lord Krishna.

Soon after the murder, four Christians including an illiterate 13-year-old boy were picked up by Hindu activists, beaten and dumped in police stations. It was not police but Praveen Togadia, the leader of Vishwa Hindu Parishad, who made public their names and accused them of killing the Swami.

Hindu activists rounded on Christians after dubbing the murder a Christian conspiracy. The unabated violence that continued for seven weeks killed some 100 people, rendered 56,000 homeless and destroyed 6,000 houses and 300 churches.

The word Dalit means "trampled upon" in Sanskrit and refers to all groups once considered untouchable and outside the four-tier Hindu caste system.

Government data shows 201 million of India’s 1.2 billion people belong to this socially deprived group. Some 60 percent of India's 25 million Christians are of Dalit or tribal origin.