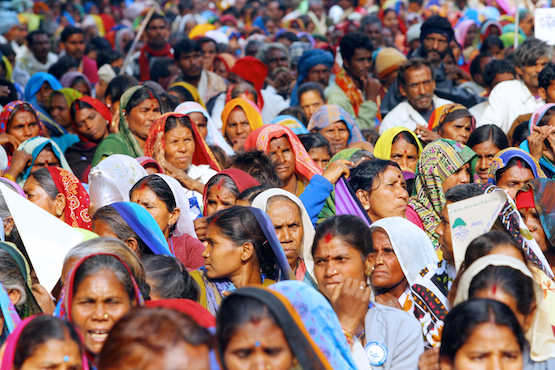 Dalits stage a demonstration in Nagpur a day after violence erupted in Bhima Koregaon village Jan. 1 during the 200th anniversary celebrations of the Anglo-Maratha War. (Photo by IANS)

But rights activists are blaming Hindu fundamentalism for a recent attack on Dalits celebrating victory in a 19th century battle against their upper-caste overlords.

A series of violent clashes between Dalits and higher-caste Maratha people were reported in several parts of western Maharashtra state in early January.

This follow a Jan. 1 attack on Dalit people marking the centenary of an 1818 battle between local rulers and forces of the British East India company.

The battle in Bhima Koregaon village resulted in the British curtailing the dominance of local Maratha ruler Peshwa Bajirao II.

The rout has been celebrated by Dalits ever since.

However, this centenary year it turned violent, with one person killed and hundreds injured.

In the ensuing clashes, more than 30 vehicles, including buses and police vans as well as private vehicles, were torched or damaged and 28-year-old Rahul Fatangale, a Maratha upper-caste bystander, was killed by a hurled rock.

“It is a very dangerous trend because we are going back to 1947 when caste and creed divided the country,” said Joseph Dias, a Catholic leader based in

Mumbai, the capital city of Maharashtra.

It was shocking that what has happened 100 years ago was still causing conflict, he added.

“All of a sudden this has happened because some fringe elements have provoked it,” Dias said in reference to Hindu fundamentalist groups.

Father Z. Devasagaya Raj, secretary of the Indian bishops' Office for Dalits and Indigenous People, said the attacks flowed from an age-old belief that Dalits should just be the servants of upper-caste Hindus.

The word Dalit means “trampled upon” in Sanskrit and refers to all groups once considered untouchable and outside the four-level Hindu caste system.

Some 60 percent of India’s 25 million Christians are of Dalit or tribal origin.