Despite hardships, most want to continue working in the city state 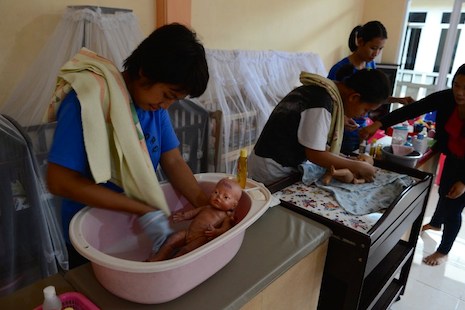 What Ami* is seeking is not particularly complicated. She would like a boss who doesn’t scream at her and a workday that won’t stretch to 18 hours long. She would like it if she weren’t forced to clean a second house at no extra pay. She would like to quietly get on with her job, make her SGD$470 (about US$353) a month, and continue supporting her family back home in the Philippines.

Instead, she is quietly killing time and growing anxious in a woman’s shelter while begging her agency to allow her to transfer to a new employer or agency.

Foreign domestic labor is big business in Singapore, where 222,500 workers hold permits allowing them to be employed by the nation’s 5.7 million residents.

The situation is lucrative, exploitive and tenuous.

Maids have helped grow Singapore’s robust economy by freeing caregivers — particularly women — to join the workforce. In addition to hefty agency fees, employers pay thousands in regulatory fees to the government each year resulting in hundreds of millions of dollars in tax revenue. Maids, in turn, boost their own economies, sending home hundreds of millions in remittances scrapped together from startlingly low wages. In a country where the average per capita income is $70,000, foreign domestic workers earn about $385 a month.

And, though they are tasked with the steep responsibilities of raising children and caring for the aged, maids face high levels of abuse and are afforded few protections.

“The recorded cases of abuse are just the tip of the iceberg because many go unreported,” points out Tam Peck Hoon, an advocacy head at the protection group Humanitarian Organization for Migrant Economics (HOME). “Not all abuse is tangible. We’re talking about psychological abuse, coercion, threat of sending them home.”

In March, HOME published the first study to look at just how prevalent such abuses are. Though the sample size was small (670 workers), the report gives ample insight into the issues faced by workers like Ami and the near-complete failure of government protections.

Of those polled, 24 percent were classified as having “poor” mental health — a rate that’s about twice the local and global standard.

Much of that mental distress, conclude the authors, can be traced to employer abuse. More than half of the respondents had experienced verbal abuse, seven percent faced sexual abuse, and six percent some form of physical abuse. Employers place restrictions on movement (74 percent of maids have at least once been ordered or locked inside); violations on privacy (27 percent have had their belongings searched); and prohibitions on their property (two-thirds had their passports held by the employers).

Phones are kept from maids, food is at times insufficient, and nearly half do not receive adequate medical attention.

Over time, such treatment has an evident effect.

“Overall, the study found an elevated level of mental distress among the FDW [foreign domestic worker] population in Singapore and clear relationships between FDWs’ mental health problems and exploitative, restrictive and abusive working and living conditions,” the report notes.

While Singapore has far better regulations in place governing domestic workers than most countries in Asia, abuse remains rife. On multiple occasions, foreign governments have banned their citizens from seeking maid jobs in Singapore, citing concerns for their safety. Most recently, Myanmar issued a five-month halt in September while calling for better rights. The injunction came the same month a Myanmar maid fell five stories while trying to escape an abusive employer.

While less horrifying, the high rates of more mundane abuse take their toll on many. Screaming and overwork is particularly common, with advocates struggling to change engrained notions of what domestic labor ought to entail. Among the more basic lessons, in mandatory day-long “Settling in Programs,” government trainers teach maids how to politely ask for more food, their legal day off, or additional time to complete a long list of tasks.

Such lessons speak far more to the employers’ behavior than that of their maids. On Internet forums and “mommy blogs,” men and women swap stories of lazy maids and outrageous behavior, though what tends to shine through is an utter failure to see their employees as human beings.

“Can anyone share if it's better to employ Filippino helpers or Indon? I had changed 2 helpers (1st one wanted to leave due to family prob, replacement maid was homesick and cry to go home everyday, currently having prob with the 3rd), all Indons and all giving me same problems in terms of work,” wrote Kayliz, on the Singapore Motherhood forum.

“[The employment agencies] agree Filippinos are more vain but according to the agents they already give an advantage as they can speak better english, smarter and can eat pork.”

On another post, a member explained how maids who insisted on the government-mandated day off each week were “a no-no for me.”

“Maid today are really picky they no longer in need of job but more to support their wants not need,” she continued.

Hoon said much of the disconnect could be traced to a basic lack of respect. Employers, she noted, often failed to afford even the slightest dignity to their maids.

“The kinds of rights we’re advocating aren’t any more than that given to any Singaporeans. We’re not asking for extra rights,” said Hoon. “Domestic workers are an integral part of [the] Singaporean economy… They’re given heavy responsibilities — the caregiving of the elderly and rearing of children. If they’re given this responsibility they must be given respect and protection.”

For maids, meanwhile, a lack of respect can tip into a dangerous situation when an employer wields so much power over the employee.

Elizabeth*, a young caretaker, found herself agreeing to tasks far outside her job description for fear of being fired. She climbed ladders to clean fungus from pine trees and lay cement when the house was being repaired. For six months, despite her protestations, she was ordered to massage her boss. Her employers were an elderly man prone to screaming at her and his ill wife — Elizabeth’s charge — who drank heavily and frequently kept her awake through the night. Over the course of her 14-months employment, stress saw her shedding kilo upon kilo. She grew weak and sickly.

“He would always shout — say ‘Stupid, you have no brains. You are a graduate but you never use your brain’ — like that. [For] no reason,” Elizabeth says.

When she complained to her agency, there was little recourse. They told her to give her employer more of “a chance” when she told them the massages made her uncomfortable. When she called months later and requested a transfer, they informed her she would have to pay two more months of salary on top of the six months she had already paid. Fed up with the agency’s refusal to assist and her employer’s stalling tactics for allowing her to transfer, Elizabeth ran away.

Today, she wants nothing more than a new employer and a chance to move on. In spite of the problems, she still considers Singapore a prime option for work. “I feel like I am lucky to come here. For me, the hope is still there.”

That hope, however, is in short supply for other runaways cooling their heels at the shelter. Part of the difficulty, advocates say, is a lack of consistency in the Ministry of Manpower’s edicts.

Maricel* wound up in HOME’s care after her employer attempted to rape her. When she told her “madam,” expecting the woman to acquiesce to a quiet transfer, her boss threatened to cancel her work permit and repatriate her unless she agreed to stay on for a few more months. After filing a police complaint, she was shocked to learn she could not pursue employment while the case was pending.

“Why am I not allowed to work?” Maricel asks through tears of frustration. “My family, you know they need support.”

With families depending so heavily on remittances, work stop orders pose significant challenges. Maricel says she’s run out of money even to make calls home and is terrified of how she will continue to send her children to school. “I want that I work,” she keeps repeating.

Singapore’s Ministry of Manpower said they could not address work bans as "FDWs who are victims of criminal cases do not fall under our purview," but said they considered emotional and mental abuse to be investigable violations. While the ministry does make an effort to prosecute violators, cases tend to move at a snail’s pace — a significant obstacle for those who can’t afford to stop working while investigations are pending. Last month, for instance, the ministry fined an employer $24,040 for defaulting on $4,340 owed to her maid over an 18-month period starting November 2011.

Those who try and deal with work violations internally, by complaining to their employer or agency, face losing their visa — something an employer can unilaterally cancel.

With investigations coming at a high price for victims, there can be little doubt that most abuse goes unreported. The maids who “ran away,” did so only after their breaking points were hit. Before then, there were months and months of small violations silently put up with and considered as simply part of the job.

Maricel doesn’t exactly regret becoming a foreign domestic worker. It has supported her family and ensured her children get a good education back home. Crucially, she wants to go back to work; she does not want to leave Singapore. When Maricel explains what happened to her, choking back tears and trying to distract herself from dwelling on her children, she does so as a warning to others.

“People say: ‘Oh you can go to other country, very nice’, [they say] like this. But it’s not easy. You can encounter any people, any type of people — you don’t know the attitude or behavior. There can be a bad experience also, like my situation. It’s very hard, very difficult. So I just want to tell to everyone who listens to me before you decide, just think first. You must prepare if you’re far away from your country, far away from your family, you must prepare.”

*Names have been changed to protect anonymity