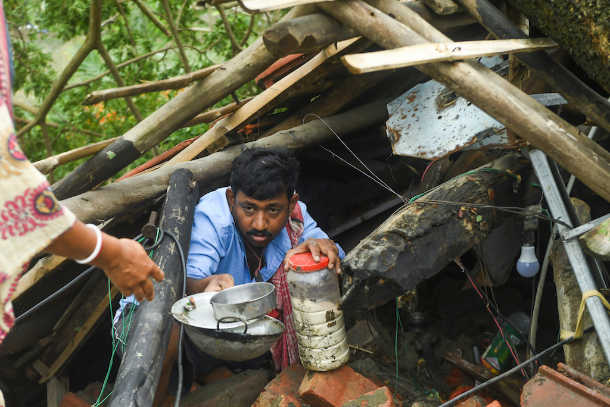 Villagers salvage items from their house damaged by Cyclone Amphan in Midnapore, West Bengal, on May 21. The strongest cyclone in decades slammed into Bangladesh and eastern India on May 20. (Photo: AFP)

Super Cyclone Amphan slammed Bangladesh and India, killing at least 24 people and leaving a trail of destruction including submerged and devastated crops, fish farms and houses in coastal regions.

The cyclone, formed in the Bay of Bengal on May 16, was as powerful as a category 5 hurricane with gusting wind speeds of up to 270kph and one of the strongest storms to hit the two countries since 1999.

The storm wreaked havoc in West Bengal and Odisha states of eastern India and at least 14 southern coastal districts of Bangladesh as it made landfall late on May 20.

Most of the 10 people reported killed in Bangladesh were victims of collapsing trees, electric poles and muddy walls, disaster management officials said.

Some 3.3 million coastal people are without electricity as strong winds uprooted electric poles and connections in many areas, according to the state-run Rural Electrification Board of Bangladesh.

The storm also severed telephone and internet connections in most of the coastal areas.

“Due to social distancing measures for Covid-19, we only evacuated the most vulnerable people, otherwise we had capacity to accommodate about five million,” Rahman said.

The minister said local administrations have been allocated rice, dried food packets and cash to support people during and after the cyclone.

The cyclone triggered a massive tidal surge up to 4.5 meters high that inundated and destroyed crops and fish farms in most areas of Bangladesh’s coastal region.

“Most people in the coastal belt have lost everything — their houses and crops destroyed and fish and shrimp farms washed away. They are now homeless and penniless,” Das said.

Cyclone Amphan was categorized as a super cyclone but became weaker when it slammed into Bangladesh. Yet it was much more devastating than Bulbul, which mostly smashed houses and uprooted trees, he said.

About 150,000 people took shelter in 47 cyclone centers run by Caritas Khulna, where they were provided with dried food, drinking water and oral saline.

“They will get food today and tomorrow, and those who lost houses and cannot return will get the same support as long as they need it. I think it will take at least two years for people from affected areas to recover from the loss,” Das said.

In India, 14 people were reported to have died as the super cyclone hit coastal areas of West Bengal and Odisha states.

The Archdiocese of Calcutta has asked its volunteers to assess the damage, officials said.

"We are badly hit both in the city and the coastal areas, especially downstream," said Archbishop Thomas D'Souza of Calcutta.

"Thousands of people are now homeless," he said, noting that some 2.5 million people were moved to safer places ahead of the cyclone.

Government agencies evacuated 1.5 million people from coastal areas of West Bengal and another one million from the coast of Odisha ahead of the cyclone.

The Church's buildings were offered to the state government to accommodate affected people, he said.

Chief Minister Banerjee told media that the situation is more worrying than the coronavirus pandemic.

She said that besides the loss of lives and properties, the cyclone also destroyed infrastructure. "It will take months to get back to normalcy,” she said, adding that crops were also destroyed by saline water intrusion and large-scale inundation.

The cyclone's impact was much more severe in Odisha, said Father Lijo George, social work director of Balasore Diocese in the state.

The diocese has deployed its volunteers and social workers in the field to take stock of the damage. Reports speak of the inundation of thousands of hectares of rice paddy.

Teams from Caritas India are working to assess the situation and to provide emergency help to those in critical condition, said its director Father Paul Moonjeli.

"We are also repositioning our people and emergency service materials to help people battered by the cyclone," he told UCA News.