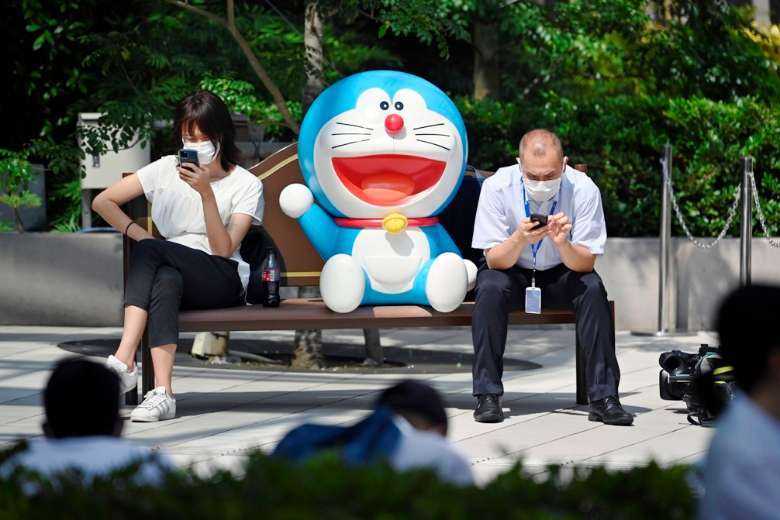 People sit with face masks on a park bench next to a cartoon character during the ongoing Tokyo Olympics in Japan. (Photo: AFP)

The Tokyo Olympics has shown that it is not only tough to make sure things run smoothly while fighting a highly contagious virus but even harder to make Western competitors and their support staff wear masks.

Eastern and Western nations belong to cultures so far apart that their responses have been completely different to the Covid-19 rules put in place in Japan’s capital city and the Olympic village.

What’s more surprising is that the cultural differences are shown live on television for the whole world to see.

During the judo tournament when the Japanese coach was giving instructions, he kept his mask on even though he could have compromised the ability of his athlete to hear his voice. But when it came to Western coaches, this was not the case. On most occasions, they removed their masks to issue instructions.

You may think this may be a fluke incident. It may have happened once or twice. It didn’t.

At the skating stadium, watching the skaters were teammates and support staff. Japan won the gold medal in both male and female categories. But they also should have been awarded a gold medal for abiding by the Covid-19 rules.

During the 18 months of this pandemic, the Japanese have not enforced any strict rules. They simply asked their citizens to stay home and people responded positively

The camera showed the Brazilian team sitting close together. Few were wearing masks while cheering their teammates. They could have been vaccinated but that is not the point. There have been many cases of fully vaccinated athletes testing positive.

What is important here is the ability to comply with the rules.

In Shibuya ward I spotted some Western athletes wearing masks, but in all probability they were breaching the 14 days' quarantine required for athletes arriving in Tokyo just before the start of the Games.

Japan’s public broadcaster NHK spoke about foreigners linked to the Olympics being spotted outside their allowed perimeter, something referred to by the media as “bursting the Olympic village bubble.”

Even the usually mild-tempered Taiwanese have protested alongside the Chinese. “Why should they be allowed to break the rules?” they complained. They did so because they would never follow the same example. It would mean shame not only for themselves but the whole national team.

In Japan “mentsu wo tamotsu” is a term that refers to saving one’s face (common in many other Asian nations) or avoiding loss of face for oneself or one’s organization. It may be the motivation behind the many things Japanese do that are hard for Westerners to comprehend.

Japanese companies, for example, are reluctant to acknowledge mistakes and Japanese employees will avoid expressing disagreement with their boss, even when they disagree with him. This could sometimes have negative consequences. But trying to be cooperative is one of the benefits of this internalized moral precept.

In Japan concepts such as “gimu” (moral obligation, duty), “reigi” (courtesy, good manners) and many others are firmly anchored in its Confucian heritage. This cultural inheritance operates as the oil that lubricates the wheels of civil peaceful coexistence.

We often hear criticism of the obedient nature of Japanese society, hierarchically structured groups where individual creativity is sometimes unable be fully expressed.

During the 18 months of this pandemic, the Japanese have not enforced any strict rules. They simply asked their citizens to stay home and people responded positively.

On the contrary, many Western countries had to impose strict penalties for observance of the simplest social duty like wearing a mask.

Still, the Japanese have acted toward foreigners as they would have to their own citizens. They simply asked the visiting athletes and their support staff to stay put in the “bubbles” inside their hotels at the Olympic village, thinking that it would be fine.

Foreigners, especially Westerners, are not used to obeying rules or policies that restrict their freedom of movement unless strictly enforced by police actions, sanctions or threats

Gently ask them to stay home and people will comply. This may have worked with the law-abiding Japanese, but clearly it is not working with foreigners.

Foreigners, especially Westerners, are not used to obeying rules or policies that restrict their freedom of movement unless strictly enforced by police actions, sanctions or threats. Westerners don’t even respond well to peer pressure as Japanese do.

The growth of the Delta variant in many counties is significant and alarming, compelling the organizers of this Olympics to adopt some really tough measures. But have the Japanese taken into consideration the cultural gap that exists between Asian and Western societies?

The clash of cultures is evident and can have potentially lethal effects.

HARRY GEORGE
This is a good story
Reply