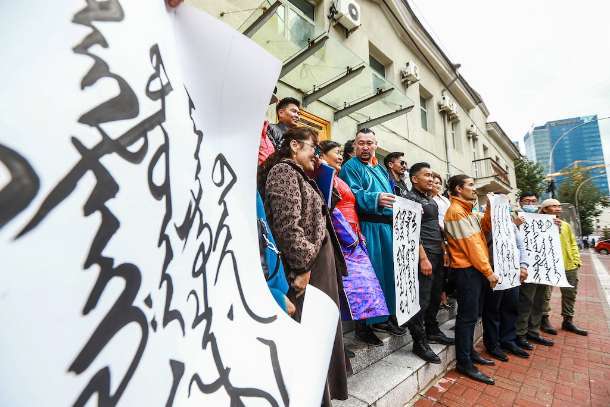 Mongolians protest on Aug. 31 at the Ministry of Foreign Affairs in Ulaanbaatar, the capital of Mongolia, against China's plan to introduce Mandarin-only classes at schools in the neighboring Chinese province of Inner Mongolia. (Photo: AFP)

Beijing’s latest move in Xi Jinping’s increasingly repressive 21st century Cultural Revolution, which has already enveloped Tibet and Xinjiang, is in the northern Chinese province of Inner Mongolia, where street protests are taking place over moves to downgrade the local language.

It’s the thin end of a broader program targeting many tens of millions of people that appears aimed at ending a process that stretches back more than 70 years to allow ethnic minorities, mainly around the peripheries of the People’s Republic of China, to be educated in their mother tongues.

Inner Mongolia has been officially damned with the “Autonomous Region” prefix that Tibet and Xinjiang also have, denoting that the area is anything but — just as in the other two provinces, the autonomous tag is about Beijing exercising tighter control rather than giving more freedom to ethnic minorities.

Mongolian activists in the region and outside China have long called the region Southern Mongolia, although it was fully absorbed into China centuries ago.

The estimated five million Mongolians in the province out of a population of about 25 million, as per the 2010 census, are greater in number than the Mongolians who live in the independent state of Mongolia to the north of Inner Mongolia that is landlocked between Russia and the People’s Republic of China and is home to about 3.1 million people.

The US-based Southern Mongolian Human Rights Information Center (SMHRIC) said that Chinese authorities shut down Bainu, the only Mongolian-language social media site in China, on Aug. 23. The site was said to host about 400,000 users in Inner Mongolia

The move came after Mongolian speakers took to Bainu to vent their anger at Beijing’s plan to phase out Mongolian-language education in the region.

“Southern Mongolia has quickly become a police state again in the past few days as the tension has risen between the government and the Mongolians who are about to be deprived of their last symbol of national identity — the Mongolian language,” a blogger named Nasandelger said in a WeChat group.

Former Mongolian president Tsakhia Elbegdorj released a video statement urging the Chinese government to respect the rights of Southern Mongolians to use their native language, according to the SMFRIC.

Thousands at risk of homelessness in Mongolia “I strongly support the Southern Mongolians’ movement to save the Mongolian language. No matter where you live, as long as you are a Mongolian, you should join this movement. Without Mongolian language, there is no Mongolian nation we can speak of. Losing your language means losing your head,” Elbegdorj said.

The Mongolian protests have also come as more damning information has come to light about the scale of internment camps in Xinjiang via US news and data site Buzzfeed.

“The construction of these purpose-built, high-security camps — some capable of housing tens of thousands of people — signals a radical shift away from the country’s previous makeshift use of public buildings, like schools and retirement homes, to a vast and permanent infrastructure for mass detention” the report said.

It identified more than 260 structures built since 2017 that it said bear the hallmarks of fortified detention compounds, with at least one in nearly every county in Xinjiang.

In the 1966-76 Cultural Revolution waged by Mao Zedong and the notorious Gang of Four that included his fourth and last wife Jiang Qing, the Chinese Communist Party stripped away much of the culture of Han Chinese. Now, almost 50 years later, Xi Jinping is stripping away what is left of the culture of Chinese minorities.