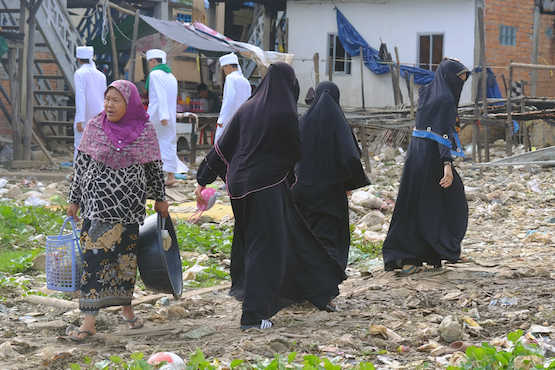 A woman dressed in traditional Cham attire stands in contrast to young women wearing the hijab and men in a Shalwar Kameez, in a remote village by the Tonle Sap, north of Phnom Penh. (Photo by Luke Hunt)

Cambodia's Chams have a troubled past. Their ancestors arrived here as refugees from ongoing wars between Vietnam and Champa, which did not end until 1832. Less than a 150-years later the Khmer Rouge nearly drove them into extinction.

Since then, their cherished traditions have faced stiff challenges from more orthodox strains of Islam with Dawa Tabligh and Salafists missionaries arriving here with an influx of foreign money as part of rebuilding efforts in the aftermath of a 30-year war.

This, according to senior Islamic figure Harkum Saleh, led to rising fears that Cambodia's moderate Muslims were ripe for conversion to hard-line strains of Islam and unwanted insinuations that their villages could provide havens for militants and terrorists.

Those fears flourished after the 2001 attacks on the United States by Al Qaeda, worsening a year later when authorities learned that Riduan Isamuddin, also known as Hambali, had plotted the Bali bombing from a Phnom Penh mosque.

It was a frustrating time for Saleh and 3,000 Muslims in Phum Kor, north of Phnom Penh.

Islamic donors were treated with deep suspicion, two madrassas closed, teachers deported and arrests made while ridiculous rumors circulated among Khmers that Chams intended to secede and re-establish a kingdom of Champa, tied to Vietnam.

"Don't compare us with Muslims in Europe or the Middle East where there have been many problems," Saleh said bluntly, from his modest home near the Tonle Sap. "We are peaceful. We are not involved in jihad even if other parts of the world are."

Still, old chestnuts abound. Three years ago the so-called Islamic State (IS) claimed several Chams were serving on its front lines in the Middle East. No evidence was found to support this but old-fashioned prejudices found a fresh lease of life on the back of this accusation.

A resurgence in tradition

When Cham women started appearing in hijab it startled pretty much everyone because no-one could remember the hijab ever being worn in Cambodia before. It returned with offshore aid about 17 years ago when background checks were rare and Chams, who follow a syncretic form of Islam incorporating elements of pre-Islamic belief systems and Brahmanism, were facing difficult times.

Parents complained that children were forced to abandon Khmer studies and learn Arabic, children who held onto traditional Cham values were bullied in school and communities were split as money arrived with foreign dictates.

Proselytes scouted for Cham boys without a father. That would classify them as an orphan in Islamic culture and Cham mothers feared their sons would be coerced into studying in unsavory madrassas in Pakistan and the Middle East.

The crackdown in Cambodia that followed the 2002 Bali bombing, that killed more than 200 people, changed that.

Scholarships are awarded through the Revival of Islam Heritage Society.

Then, at the start of the school year in October 2008, Cambodian Prime Minister Hun Sen drew loud cheers when, for the first time, he urged Muslim Chams to adhere to their traditions, signalling an end to war-time, communist habits.

"In the past Cambodians looked at us in the same way as Europeans look at Muslims now, despite our people coming here many hundreds of years ago," Saleh, spokesman for the Kilometre Eight Mosque in Phnom Penh, said.

He said Islam is now practiced openly, mosques have been renovated, men can wear a shalwar kameez and skull cap, halal food is in abundance, holidays are observed and a Muslim curriculum is taught in schools, hand-in-glove with Khmer history. Harkum Saleh, a senior spokesman for the Kilometre Nine Mosque in Phum Kor, says relations with the government are good and that Cambodia's Muslims should not be compared with Islamic "trouble makers" elsewhere. (Photo by Luke Hunt)

Saleh also insists that wearing hijab is not enforced and only became fashionable after Hun Sen sought a return to Cham values, almost nine years ago, when girls whose families would not conform on school uniforms were taken out of school and denied an education.

"It is up to her. This is not Malaysia or Iraq telling our women what to wear," he said. "We face no pressure, the government is really taking care of us."

By 2004, according to anthropologist Alberto Perez-Pereiro and an estimate published by the Far Eastern Economic Review, 40 percent of Chams had turned to the more orthodox Dawa Tabligh or Salafi brands of Islam. About 75 percent of Cambodia's 400,000 Muslims are ethnic Chams.

"Most Cambodian Muslims now subscribe to one form of orthodox Islam typically Tabligh or Salafi, but there is no census that tells us what the percentage is. I would say Tabligh are certainly larger but it's hard to tell," said Perez-Pereiro.

He said Salafis mainly lived in urban areas and Tabligh had taken hold in the countryside while smaller Islamic communities and Muslims who do not identify with any particular sect were still being influenced by broader international movements.

"They're all in some kind of contact with different forms of religion practices outside of Cambodia," said Perez-Pereiro, who is also general manager of Breogan Consulting.

Dawa Tabligh came here through Malaysia, is non-political and preaches a return to Sunni Islam values with a focus on spiritual reform. Salafism arrived from the Middle East, is a religious-political ideology based on "physical" jihad with its roots in Sunni Islam.

Government encouragement, the weeding out of militants like Hambali, and sharper checks on funding have improved life for the Chams who, Perez-Pereiro notes, as citizens enjoy the all same benefits as other Cambodians — a very different situation to Muslims in Thailand and Myanmar.

Chams are famed for their hard work ethic — which is helped along by an abstinence from alcohol — and making the most of dramatically improved opportunities through education.

"A steady stream of foreign income has enabled Cham villagers to pay for teachers and children get a reasonable education because teachers get paid properly," he said.

While life has improved, Saleh said about 70 percent of Chams — like most Cambodians — are still challenged.

Fish stocks have been depleted to the point where fishermen are hanging up their nets and now rely on factory jobs where pay is small or work on construction sites where laborers earn as little as three dollars a day. Disputes over corruption and land are constant amid speculation that IS militants might return and make trouble.

Ly Mohammed, a religious teacher at the nearby Kilometre Nine Mosque, echoed Saleh's sentiments saying life had its difficulties but religious freedoms had led to a renaissance among his people in recent years, adding that jihad was not on the agenda.

"There are some religious rules that we need to follow and we do not accuse others of being bad just for eating pork or drinking alcohol," he said.

"Before, we would not even wear a traditional skull cap in a photo for a passport or an ID card but now as Cambodians we are free to practice any religion we want. The future is bright." 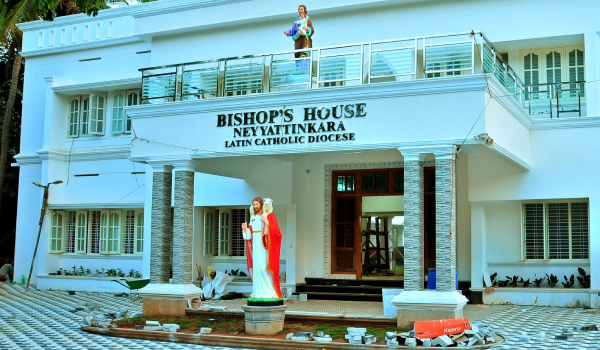