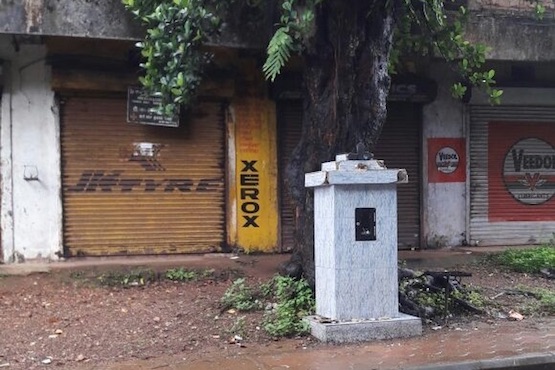 One of the two crosses destroyed in Goa on July 6. The ongoing vandalism targeting crosses continued as some 40 more crosses were destroyed on July 10. (Photo by IANS)

At least 40 crosses were destroyed at a Catholic cemetery in the western Indian state of Goa, in a fresh wave of vandalism targeting symbols Christians hold dear.

The incidents of July 10 are "designed by vested interests to provoke communal discord and promote religious hatred," Archbishop Felipe Neri Ferrao of Goa said in a statement.

Crosses and gravestones were vandalized at the Guardian Angel Church cemetery in Goa, where the pro-Hindu Bharatiya Janata Party heads the state government.

The incident follows the destruction of crosses on roads that began in June in the Catholic-strong hold area of south Goa, prompting many to suspect the vandalism as a plot to pitch local Christians against Hindus.

The archbishop has appealed to people of "all faiths to refrain from taking any retaliatory action or fanning the flame of religious hatred."

Noting that the state has a tradition of "interreligious harmony and peace," the archbishop urged people "to keep these sacred values at all cost." He has asked the government to thoroughly investigate the incidents and "and bring the perpetrators to book."

The latest damage of July 10 was the largest single act of destruction, with police claiming that some heavy machinery was used to destroy and even dig up graves.

Earlier, in seven such incidents since June, nine crosses and a Hindu religious symbol were also destroyed.

The state's Town and Country Planning Minister Vijai Sardesai described the desecration as "acts of terror."

Michael Lobo, speaker of the state legislative assembly and member of the BJP, blamed the incidents on "outsiders" and said "There is a strong attempt to divide us." However, Mario Britto, a Catholic said, "If the police are really serious about unraveling the mystery of the desecration, they ought to start investigating the (government) ministers' links with fundamentalists organizations."

Meanwhile, church officials have set up a fact-finding team to prepare a report on the incidents.

Of the 1.8 million people in Goa, some 25 percent are Christian, almost all Catholics. Hindus make up 66 percent of the population. Muslims and others constitute the rest.