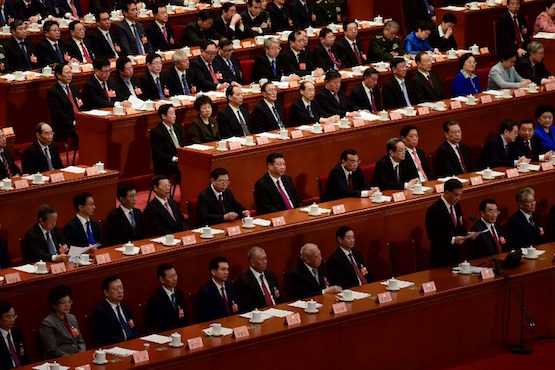 China's President Xi Jinping (C) attends the closing session of the Chinese People's Political Consultative Conference (CPPCC) at the Great Hall of the People in Beijing on March 15. (Photo by Wang Zhao/AFP)

The man believed to be the key person leading cross removals in Zhejiang province has been promoted in what observers regard as a setback for religious freedom in China.

Xia Baolong has been elected as vice-chairman and secretary-general of the Chinese People's Political Consultative Conference (CCPPC).

From 2002 to 2007, when President Xi Jinping was in charge of Zhejiang, Xia was Xi's trustworthy subordinate and a member of "Xi's Troop" (Xi Jia Jun).

After being appointed as Zhejiang provincial party committee secretary in 2013, Xia was thought to be behind the forcible removal of 1,700 crosses from Catholic and Protestant churches and church demolitions that triggered bloodshed.

It had been rumored that Xia would be promoted to a more important post in Beijing, but in April 2017 he was instead transferred to the insignificant post of deputy director of the environment and resources protection committee under the National People's Congress.

As doubts grew about the relationship between Xi and Xia, the latter received his double promotion at the 13th CPPCC on March 14 in Beijing. The position of secretary-general is commonly known as the "CPPCC's steward" and carries real power.

Sang Pu, a regime critic in Hong Kong, told ucanews.com that Xia's promotion indicates that suppression of Christianity by the Communist Party and Xi will continue.

"After Xia was transferred to an idle post, it was speculated that forcible cross removal would stop in Zhejiang. However, cross removal never stopped in the province and other provinces, which reflects there is no change in nature from the central government to the local authorities on the suppression of religions,"Sang said.

To analyze whether religious persecution is relaxing, one should not just look at officials who directly handle suppression but also at the central government to see if it has restrained its oppression, he said.

"The central government has never changed its entire policy, its hatred of religions and its mentality to eliminate religions," Sang said.

He cited Wang Qishan as an example of how a dictator can manipulate his bureaucrats. Wang, who once served as secretary of the Central Commission for Discipline Inspection but later was given an idle post, was also suddenly elected as vice-president with a non-limited term of office.

"Before giving an important job to them, he must first take away their former official position, make them fear and not know what to do, and then look at their loyalty. They would be offered the higher position after they pass the test — the tactic used by an emperor to manipulate his bureaucrats," Sang said.

Professor Ying Fuk-tsang, director of the divinity school of Chung Chi College at the Chinese University of Hong Kong, told ucanews.com that Xia's role in cross removal was unquestionable and his promotion reflected Xi's affirmation of what he was doing.

"Though Xia's post now will not have a direct influence on religious policy, the CPPCC as a united front institution is governed by someone who is hostile to Christianity. It is unavoidable to regard this as a setback," he said.