Spate of violence triggers extreme fear among more than 400,000 residents of the world's largest refugee settlement Rohingya refugees at Kutupalong refugee camp in Cox’s Bazar. An increase in crimes in refugee camps has become a cause of concern for law enforcers in Bangladesh. (Photo: Stephan Uttom/UCA News)

Hundreds of thousands of Rohingya in Kutupalong refugee camp in Cox’s Bazar have witnessed the deadliest week since their exodus from Myanmar’s Rakhine state more than three years ago.

From Oct. 4-7, a series of clashes erupted between allegedly armed Rohingya gangs culminating in arson attack and shootings that left eight dead and scores injured.

This deadly spate of violence triggered extreme fear among more than 400,000 residents of what is dubbed the world’s largest refugee settlement.

The government deployed additional police, border guards and military to bring the situation under control. A joint force conducted raids in the camps throughout the week and arrested at least nine armed Rohingya for their involvement in clashes. 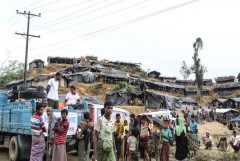