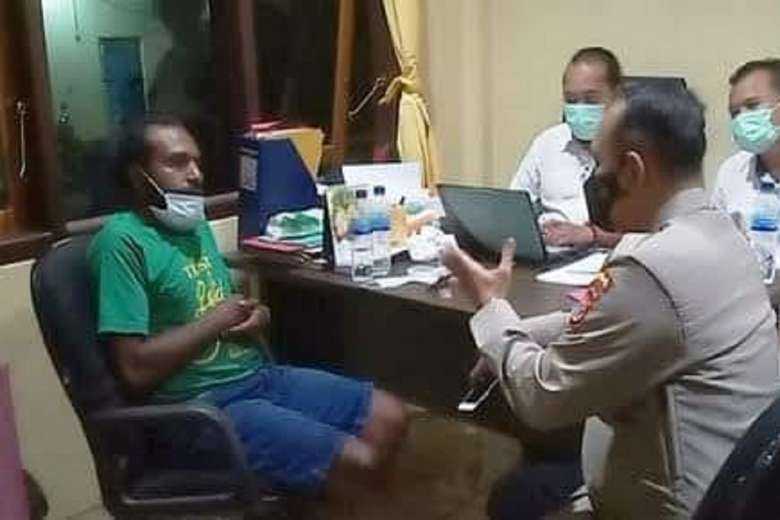 Victor Yeimo, the international spokesman for the West Papua National Committee, is questioned by police following his arrest on May 9. (Photo supplied)

The recent arrest of a Papuan pro-independence leader by Indonesian police for allegedly masterminding violent protests against racism two years ago only serves to reinforce a view that authorities are prejudicial against Papuans, a church group and other activists say.

The arrest of Victor Yeimo, the international spokesman for the pro-separatist West Papua National Committee, in the provincial capital of Jayapura on May 9 will make an already tense situation in the country’s easternmost region worse, they said on May 11.

Papua police chief Mathius Fakhiri said Yeimo was arrested in connection with anti-racism riots in August 2019 in cities across Papua where more than 30 people were killed and many public buildings damaged.

The wave of violence followed the arrest of some Papuan students in Surabaya, East Java, who were racially abused by people who had accused them of desecrating an Indonesian flag.

Fakhiri said Yeimo faced treason charges for inciting violence and social unrest, insulting the national flag and anthem, and carrying a weapon without a permit.

He said charges could also be laid for spreading false information to Veronica Koman, a lawyer and pro-Papuan rights activist wanted by the Indonesian government for speaking out against alleged rights abuses committed by state officials and security forces against Papuans.

“He is still being interrogated and we are currently examining all complaints against him. Leave him in jail until he is old,” Fakhiri said.

Korneles Siep, from the Franciscan Secretariat for Justice, Peace and Integrity of Creation, said he was worried the arrest would make an already tense situation worse.

"Recent events have made Papuans feel increasingly discriminated against and this arrest is making that clearer in their eyes," he said.

"I am worried that the situation will become more chaotic and may descend into sectarian conflicts.”

He was referring to the Indonesian government labeling Papuans separatists and their supporters as terrorists after the killing of Papua’s intelligence chief by armed rebels in late April.

Last week the military said it was ready to deploy an additional 400 troops to Papua from a specialist battalion known as Satan's Force.

Meanwhile, Emanuel Gobay, director of the Papua Legal Aid Institute and one of Yeimo's legal advisers, condemned the arrest and claimed there was no solid evidence that Yeimo was the mastermind behind the 2019 protests.

“The riots were a spontaneous response to racism that hurt all Papuans,” he told UCA News. "He [Yeimo] took part in the protests but was not involved in any planning."

By arresting Yeimo, the wounds will get deeper as people will see it as an activist being prosecuted for opposing racism

The lawyer pointed to the fact that those prosecuted for the protests received longer sentences than those who made the slurs against the students that triggered the unrest.

"By arresting Yeimo, the wounds will get deeper as people will see it as an activist being prosecuted for opposing racism," Gobay said.

"The big question is, what is the purpose of this arrest? Does this country want to seek peace in Papua or does it want to perpetuate instability and conflict?” he asked.

Charging Yeimo with treason was another example of the tenuous state of freedom of expression in Papua and how authorities treat indigenous Papuans more harshly than migrants from other parts of Indonesia, he said.