Chinese President Xi Jinping inspects a guard of honor after arriving in Rwanda on July 23 for a a two-day state visit. The first cracks in his facade of strength are starting to show. (Photo by Simon Maina/AFP)

It's not just domestic hoo-ha either; China's trade stoush with the United States is also causing concern amongst business people as it comes at a time when China's economy, whose growth has underpinned the legitimacy of the ruling Communist Party for decades, starts to slow.

Xi's aggressive foreign policy is also causing consternation inside China about debt and externally about intent. Strategically, there has been an unprecedented military build-up and illegal South China Sea expansion, while economically a seemingly endless stream of billions of dollars in strings-attached loans is part of China's ambitious bid to recreate ancient Silk Road trade routes.

The rapidly escalating tit-for-tat tariff spat with the United States is causing consternation for Chinese businesses. In reality, it's a very belated but perhaps too late attempt to call out China's decades-long mercantilist policy of using low exchange rates to promote its exports as it has stolen technological intellectual property.

The Middle Kingdom's Asian neighbors, too, are beginning to look closer at the details of China's economic embrace and are waking up to the often unacceptable price of its hard economic "assistance" as China seizes control of offshore assets that can't pay Beijing back. On top of that there is its more insidious "soft power" influence via the ruling Communist Party's opaque United Front Work Department.

Almost overnight, it seems the narrative amongst China watchers has changed from one of the Xi ascendancy to one about the so-called summer of discontent that has come with such a wham (street protests in Beijing's financial district are not everyday events).

This has seen Beijing try a difficult two-step of both pulling back from galloping too fast with some of its initiatives to placate the general populace while keeping the pressure on its top-line critics and undesirable elements like western religion, dissidents of any type and Xinjiang's ethnic Muslim Uyghurs.

Signs that the seething rot of corruption inside the party had seeped into the real world once more appeared when pharmaceutical company Changchun Changsheng Biotechnology, from coastal Shandong province which lies between Tianjin and Shanghai, had been discovered to be manufacturing substandard vaccines for children.

The preventative medicines were sold mainly to the Shandong government and authorities continue to adjust upwards the figures involved, with the latest number of such faulty vaccines now admitted to be more than 1 million. Since then, at least one other major supply of vaccines from the Whuhan Institute of Biological Products has been found to have produced at least 400,000 doses of faulty vaccine. In response, many Chinese parents have withdrawn children from vaccination programs across the country, punching a hole into a long-term government program that has contributed to falling disease rates.

Angry parents vented on social media, the main platform for civic outrage in China, and some even braved street protests, picketing the National Health Commission in Beijing for two days at the end of August. 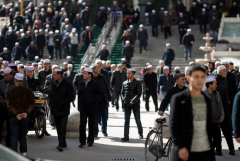 The Chinese people have immense forbearance. They have suffered the yoke of their emperors — Xi being just the latest in a very long line — for millennia. Systemic corruption is a way of life but when it affects their children the collective camel's back breaks.

Coming almost exactly one decade after the tragic infant milk scandal vaccine scandal, the vaccine scandal is a wakeup call to regular Chinese people of the systemic corruption that infects China and in particular the relationship between wealthy companies and party officials. Critically, it is a major breach of trust between the government and the people.

While censors moved quickly to block vaccine and associated terms on China's tightly controlled internet, the government appears to have understood the ramifications and has moved relatively swiftly, sacking officials responsible in an effort to win back shattered trust in the program, and there is likely more to come.

Hot on its heels came an explosion of anger over the collapse of online financial platforms, known as peer-to-peer lending (P2P), that allow people and small businesses to lend money to each other. Since June, at least 243 P2P companies have gone broke, taking some of their customers with them.

Online finance in China has been allowed to grow unfettered and barely regulated, with many fraudsters following a lead by the country's generally untouchable, politically connected big three internet groups, Alibaba, Tencent and Baidu. Alibaba's separately listed subsidiary Ant Financial, an online payment financial services company, is now the world's largest digital finance group. The P2P industry is massive. With an estimated loan value of 1.49 trillion yuan (US$216 billion), it is a potent financial — and potentially political — force. Investors have demanded the government step in and rescue them. Some have also organized rare street protests, one in Beijing's financial center.

The odds that there are other similar multibillion-dollar accidents floating around the internet cloud waiting to happen are pretty high and the authorities are clearly spooked.

Given the way the party machine works, its leaders only want to be associated with wins. Despite the internet censors' best efforts, seriously negative incidents like these occur and enter the public domain via social media. China watchers have noticed, at various times in the past month or so, that the usually omnipresent Xi has disappeared from the front pages of the party mouthpiece The People's Daily for days at a time, a sign of bubbling unease at senior party levels and possibly an attempt to cool the apparent build-up of a personality cult around the leader.

It appears that concerns about the US-China trade war have also spread among the general population. This has occurred amid growing critiques from academics over the party's handling of the stoush and Xi's tone of triumphalism.

Put simply, the first cracks in the Xi facade of strength through this so-called summer of discontent are beginning to show.

"Mr Xi's dilemma is reflected in his inability or unwillingness to make strategic decisions. He advocates rule of law but strengthens the party commission that decides verdicts," veteran Asia expert William Overholt wrote this month in a well-received essay that also insisted Xi was handed power by the party to assert its role.

"He advocates marketization of state enterprises but strengthens party committees' control of business decisions in both state and private enterprises.

So the question now is, have we now seen peak Xi Jinping?