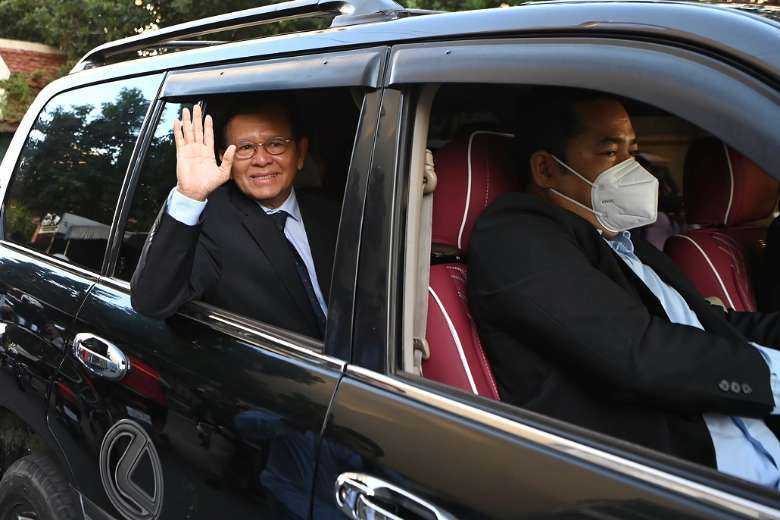 Kem Sokha, former leader of the now-dissolved Cambodia National Rescue Party, gestures as he heads towards Phnom Penh Municipal Court for the resumption of his trial on treason charges on Jan. 19. (Photo: AFP)

Cambodians are bracing early for this year’s commune elections amid warnings from Prime Minister Hun Sen and the military of crackdowns against any attempt to “overthrow the elected government” and the continued prosecution of outlawed politicians and their supporters.

Crackdowns threaten to overshadow the June 5 polls, which should also provide an important bellwether as to how 19 political parties will perform against the long-ruling Cambodian People’s Party (CPP) at the national ballot scheduled for July next year.

The first post-war, free and fair local elections were held across communes, which represent clusters of villages, in 2002 and were designed to complete the nation’s transition to a democracy. They were widely hailed as a success.

At this year’s commune elections Cambodians will vote to fill 11,622 council seats in 1,652 communes and the CPP wants to improve its standing after the now-outlawed Cambodia National Rescue Party (CNRP) substantially improved its tally in the 2017 commune polls.

However, analysts said those ballots were cast against a backdrop of bullying and intimidation with politicians and the military using their respective clout to silence dissent, including a ban on opinion polls.

Defense Minister General Tea Banh warned he would “smash the teeth” of those demonstrating against the commune election results. He also urged people to vote for the CPP.

“If they lose, but do not accept that loss, and come up with this or that demand — maybe soon we will smash their teeth,” he said back then. Hun Sen also said he was willing to “eliminate 100 to 200 people” if his ruling CPP did “not win elections at all stages.”

Western nations and human rights groups have sharply criticized Cambodia in recent years for a deterioration in democratic standards, more so since the CNRP was dissolved by the courts just five months after the last commune elections.

That enabled the CPP to win all 125 seats contested in the National Assembly at general elections in 2018 ensuring Cambodia — once again — became a one-party state.

And the threats, intimidation, sweeping arrests and the detention of hundreds of CNRP supporters have continued, with former leaders like Sam Rainsy charged in absentia and sentenced to decades behind bars for convictions ranging from treason to incitement. The treason trial of former CNRP leader Kem Sokha is ongoing.

Sam Sokha was freed from prison last week after completing a four-year sentence for throwing a sandal at a CPP billboard depicting Hun Sen a few months before the 2017 commune election.

“Much of what is happening today can be traced back to general elections in 2013 and commune elections in 2017 when the CNRP went very close to winning the popular vote and that shocked the CPP,” said one Western analyst, who declined to be named. “Political life got a lot nastier after that.”

Hun Sen holds the rotational chair of the Association of South East Asian Nations (ASEAN) in 2022 and has warned his government “will do what it takes to crack down” on protests against his authoritarian rule while chairing the 10-member bloc.

That was followed by yet another warning from Hun Sen that he “must use iron fists” against those “ill-intended groups who planned to destabilize the kingdom through illegal protests.”

“This type of rhetoric has unfortunately become the norm during the months ahead of Cambodian elections. Often they are judged free and fair on election day but the lead-up to the polls is too often marred by fear and intimidation,” the Western analyst said.

There has been speculation of up to six political parties forming some kind of an alliance to battle it out against the CPP, which has a formidable organizational structure

Analysts said the absence of the CNRP at this year’s commune elections will provide the CPP with an obvious opportunity to regain the political ground lost in 2017.

It will also give the 19 minor parties a chance to win at least some influence in local government but, according to human rights groups, many of those political outfits are actually CPP proxies.

Others were formed by CNRP’s defectors and those deemed “rehabilitated” and include the Cambodia Reform Party, the Khmer Conservative Party and the Khmer National Love Party.

Funcinpec, the royalist party which once held government but failed to win a seat at the last national ballot, is struggling to regroup following the death of its long-time leader and former prime minister, Norodom Ranariddh. His son, Prince Norodom Chakravuth, was elected leader last week.

Only the Khmer Will Party, League for Democracy Party and Grassroots Democracy Party were considered totally independent of the CPP or largely free of affiliations with the CNRP and other opposition groups.

“There has been speculation of up to six political parties forming some kind of an alliance to battle it out against the CPP, which has a formidable organizational structure across the country,” said another analyst, who also declined to be named.

“But the reality is none of those parties pose a serious threat to the CPP. Still, if they can improve their standing by limiting CPP gains, then that might augur well for the future. In the meantime Cambodian politics remains brittle.”