Supporters of the Islami Andolon Bangladesh, an Islamist party, hold a protest march in Dhaka on Oct. 27 calling for the boycott of French products and denouncing French President Emmanuel Macron for his comments over Prophet Muhammad caricatures. (Photo: AFP)

Asad Noor was born to a Muslim family in southeast Bangladesh, but he renounced Islam and became a self-styled atheist in 2012.

Trouble started brewing for him when he began blogging in 2016, mostly criticizing religions and religion-based injustices. He was charged under Bangladesh’s draconian Digital Security Act (DSA) twice and spent 14 months in jail. He left Bangladesh in 2017 and since then has been based in India.

“I have mostly written about rights of minorities and injustices against them. I have been critical of Islamic extremism. That’s why I have become a target of religious fanatics and the government,” Noor, 30, told UCA News.

Noor has recently been facing the ire of an Islamist-political nexus in Chittagong for supporting a Buddhist monk who has been falsely accused of insulting Islam on social media. Secularists claimed the monk has been targeted for opposing attempted grabbing of a local temple and monastery.

In July, Noor was against charged under the DSA for hurting the religious sentiments of Muslims with his social media posts.

In his absence, police allegedly detained and interrogated his family members for hours on July 18 before releasing them due to pressure from rights groups at home and abroad.

“Bangladesh's government attempts to present the country as a bastion of pluralism and tolerance, but in reality there is no freedom of speech. The DSA was formulated mainly to curb free speech and it has truly become a weapon to muzzle free speech and dissent,” Noor said.

His family has been traumatized since police detention, Noor said, adding that his younger sister “cries out in her sleep” at night. “Their suffering has touched me deeply and hampered my regular writings as well,” he added.

The case of Noor has become common in Bangladesh for critics of religious extremists and the government in recent times, rights groups say. 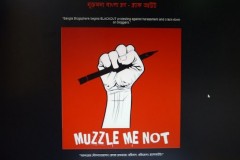 In a joint statement on Oct. 24, four international rights groups — Amnesty International, Asian Human Rights Commission, Human Rights Watch and Robert F. Kennedy Human Rights — deplored the government’s crackdown “on those exercising their right to freedom of expression, and its failure to comply with its international obligations to uphold fundamental rights.”

Similarly, Khalil has alleged that on several occasions police visited and questioned his mother, who is based in Sylhet district of Bangladesh. In the latest case, two police officers visited her on Oct. 27.

“Earlier today, two officers from the Special Branch visited my mother Nazneen Khalil’s residence in Sylhet. As she is isolating herself due to very high Covid-19 risk, my mother did not let them inside — they stood outside the main door and talked to her via phone. She was questioned about me, my siblings and our current whereabouts. They also wanted to get personal details on me,” Khalil wrote on Facebook.

Earlier, the government blocked Netra News, a news portal edited by Khalil, after the authorities accused it of publishing anti-state content.

Rights groups deplored these threats to family members and termed such actions as adding “to the serious concerns about the widespread crackdown on activists, journalists, and others who question or criticize the government.”

“Bangladeshi authorities should independently and impartially investigate these allegations of harassment, hold members of security forces accountable for their actions, and put an end to the intimidation of family members of activists and those exercising their right to freedom of expression,” they said.

Once known as a moderate Muslim-majority country with a long-held tradition of religious harmony and pluralism, Bangladesh has seen a sharp rise in Islamic militancy since 2013.

Islamic militants attacked and killed about 50 people including nine atheist bloggers and writers, accusing them of defaming Islam and the Prophet Muhammad, and it forced dozens of atheist bloggers to flee to Europe and the US.

The government also arrested four atheist bloggers but later released them on condition of not “hurting religious sentiments” anymore.

In 2018, the DSA was passed despite strong opposition from journalists and free thinkers who argued the cyberlaw contained huge scope for abuse and meant to gag media and freedom of speech.

Since then over 1,000 cases have been filed against individuals and groups under the law, mostly over allegations of hurting religious sentiment, local media reported.

“Without proper investigation and punishment for perpetrators, a climate of fear will descend on Bangladesh, which has already seen a crackdown on media and dissent. If this continues, democracy will die a slow death,” Khan told UCA News.

“The government takes on anyone who somehow hits at government interests. Everyone has a constitutional right to criticize the government and it is unacceptable that their families face harassment,” Father Gomes told UCA News.

“The government is afraid of criticism, but it could learn much from criticism had it taken criticism positively. We are far from learning how to tolerate and digest criticism.”

Government officials and allies have claimed Bangladeshi citizens are allowed to exercise freedom of speech properly.

“There is no direct and indirect hindrance of freedom of speech in Bangladesh,” Hasnul Haque Inu, president of the parliamentary permanent committee on the Information Ministry, told BBC Bangla Service this week.