As the virus spreads, so have recriminations aimed at migrant workers from Myanmar 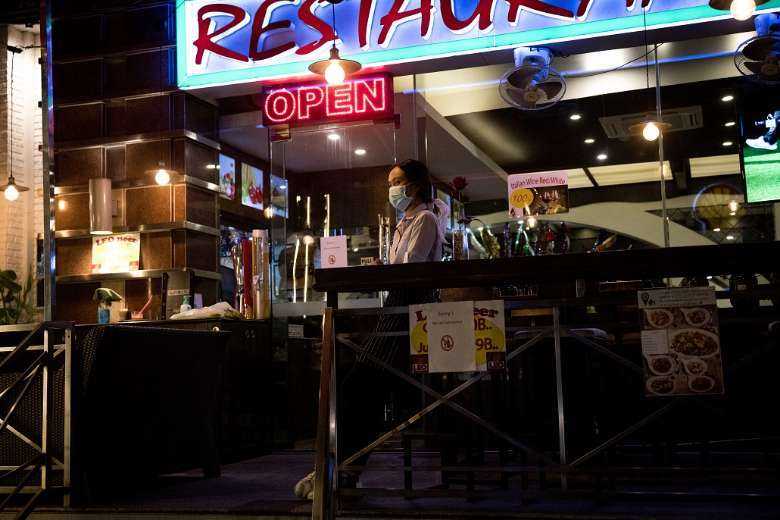 A waitress looks out from an empty restaurant in Bangkok on Jan. 2 after the Thai capital imposed temporary lockdown measures aimed at curbing the rising coronavirus toll. (Photo: AFP)

Migrant workers from Myanmar are among the most heavily impacted groups in Thailand as the country continues to grapple with a second wave of the coronavirus outbreak. Yet even as they are facing potentially severe health problems with little medical care, they continue to be blamed for a re-emergence of Covid-19 in Thailand.

As many as 448 migrant workers tested positive one single afternoon on Jan. 3 in the central province of Samut Sakhon, the epicenter of a new outbreak that reported a total of 541 more Covid-19 cases that same day.

The new batch of confirmed cases caused the provincial tally to soar to more than 2,400 in a country where until last month there had been essentially zero community spread, according to local authorities, and which had been held up internationally as an example for how to contain the pandemic.

Since the first cases of local transmission were reported in Samut Sakhon last month, the infections have spread to other parts of Thailand, including the capital Bangkok. That has prompted the government and provincial administrators to enact strict lockdown rules, which could prove economically ruinous for low-income earners and small businesses.

And as the virus has been spreading, so have recriminations aimed at migrant workers. Senior Thai officials, including the health minister, have said repeatedly that the second wave of the coronavirus likely started among migrant workers from Myanmar at Samut Sakhon’s Central Shrimp Market where numerous migrants are employed.

Prime Minister Prayut Chan-o-cha, meanwhile, has publicly accused migrant workers of having “brought much grief to the country.” Many irate Thais, too, have taken to social media to follow suit and accuse migrant workers of spreading diseases and endangering the health of locals.

Rights activists have stressed that there has been no concrete evidence provided by Thai authorities that migrants from Myanmar were indeed responsible for triggering the second wave of infections. Rather, the fact that a large number of migrant workers have been infected could be the result of their cramped living conditions in often unsanitary circumstances, they said.

“It is unclear where the original source of infection came from, but it is obvious that migrants live in conditions ripe for the rapid spread of Covid,” Brahm Press, director of migrant rights group MAP Foundation, told a foreign news organization. “This is not their fault.”

In one high-profile incident late last month, officials in Samut Sakhon surrounded a dormitory at the shrimp market where migrant workers lived and erected barbed wire around its perimeters without warning in order to prevent those inside from leaving the premises.

“Migrants woke up one day and had barbed wire surrounding their compound,” Press noted. “I don't think [the authorities] would have done that with [Thai] workers. Not only is it discriminatory, it is derogatory.”

In another widely reported recent case, the owner of a plastic factory in Samut Sakhon told the 14 migrant workers from Myanmar working at his plant to get into his minivan and then proceeded to drive them out of town and abandon them to their fate at a roadside.

The incident caused widespread outrage among well-meaning Thais sympathetic to the plight of migrant workers. Nonetheless, local authorities have yet to charge the man with any lawbreaking, although he clearly violated strict lockdown rules by transporting the unwitting migrant workers out of the province against their will.

Many rights activists believe that migrant workers are simply convenient scapegoats after Thailand’s government dropped the ball on the pandemic and allowed the virus to surge back.

“Rather than seeking a scapegoat, [we should view] the current outbreak, centered on Samut Sakhon’s Central Shrimp Market, [as an event that] brings into sharp focus the disproportionate impact that the pandemic is having on the livelihood and health of Thailand’s much maligned migrant workers,” the Mekong Migrant Network, a rights group, said in a statement.

“The seafood industry in Samut Sakhon, like elsewhere in Thailand, is hugely dependent on the low-paid labor of migrants from Myanmar and Cambodia who live and work in conditions where physical distancing and recommended hygiene measures to prevent the spread of Covid-19 are largely absent.”