At least 40 members of the “largest family in the world” in India's Christian-majority Mizoram state have tested positive for Covid-19.

The family has 184 members including 39 widows of family patriarch Ziona Zionnghaka, who ran the native Chana Pawl cult before his death on June 13 at the age of 76 from what health workers said was acute hypertension and diabetes.

According to a senior health official, at least 40 people belonging to Ziona's family in Chhuanthar Run in Chhuanthar Tlangnuam village have tested positive for the coronavirus.

Chhuanthar Run is situated at the center of Chhuanthar Tlangnuam village in the northeastern state's Serchhip district and is a four-hour drive from state capital Aizawl.

Social workers in Aizawl say the family never formally joined Christianity and practice polygamy despite the fact that it is not permitted by Christianity.

Altogether, 306 people in Chhuanthar Tlangnuam, home to 2,224 people who are also followers of Ziona, have been infected with the coronavirus, a health official told UCA News.

The official said initially only three tested positive on July 15 but as contact tracing was conducted and further tests were carried out, the figure jumped.

"This percentage is one of the highest in a single village," social worker Pu Lalrupui said.

Ziona's son Nunparliana, 60, the present head of the family, confirmed to UCA News that many family members have tested positive for Covid-19. Nunparliana, who runs a furniture workshop, has two wives and 15 children.

Officials say the recovery rate of Covid patients in Mizoram is still low at 74 percent against the national average of 97 percent. Around 22,800 people have recovered in the state. 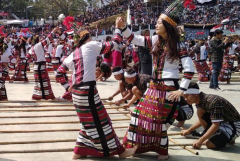 Mizoram is the homeland of the Lushai tribe and was once called Lushai hills. It also has a substantial Hmar community.

A substantial number of Mizos, who speak a Tibeto-Burman language, say they are Jews and claim to be Bnei Menashe (sons of Menasseh), descendants of one of the 10 lost tribes of Israel.

Some 87 percent of Mizoram’s 1.1 million people are Christians, predominantly Presbyterians.

Presbyterian churches in Aizawl and other places have been at the forefront of the Covid battle as Mizoram faced a shortage of quarantine centers and healthcare facilities.

Without the proactive supportive role of churches and Christian volunteers, the Covid crisis in Mizoram would have been a more difficult proposition altogether

Esther Lal Ruatkimi, a prominent Christian social worker and chairperson of the task group of quarantine facilities, also lauded the role of churches.

"Without the proactive supportive role of churches and Christian volunteers, the Covid crisis in Mizoram would have been a more difficult proposition altogether," she told UCA News.

"At one time the challenge had grown manifold as Mizoram faced a shortage of quarantine facilities because a large number of people returned to the state with Covid-19 from various parts of the country. But a united effort by all stakeholders and active involvement of the churches have helped us."

The Young Mizo Association has also offered its halls to be used as Covid care centers where infected people can be treated.