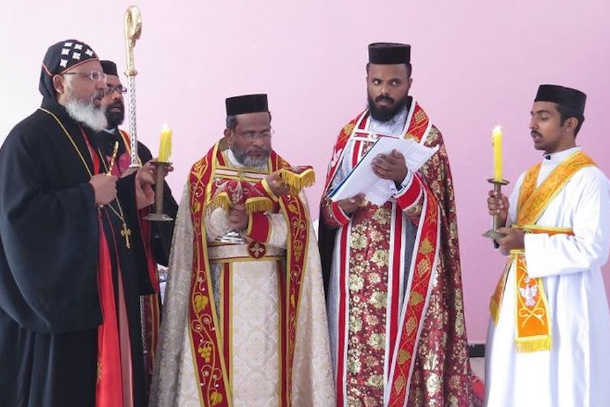 A liturgical celebration in progress in a parish of the Malankara Orthodox Church in Kerala. (Photo: Wikimedia)

Stiff opposition from a group of people in Kerala has forced church and civic authorities to postpone the burial of an Orthodox priest who died from Covid-19 in the southern Indian state.

Father K.G. Varghese, a 77-year-old priest of the Malankara Orthodox Church, died on June 2. He was hospitalized after he fell from a motorbike and tested positive for coronavirus hours before his death in the state capital of Thiruvananthapuram.

Father Varghese could not be buried in his parish cemetery because it uses pre-constructed vaults, which goes against the government's burial protocols for Covid-19 victims.

A cemetery in Malamugal village was selected for his burial but media reports said villagers opposed the burial for fear it could spread the virus in their area.

However, Orthodox Bishop Gabriel Mar Gregorios told UCA News that the objection was related to a land dispute rather than the priest's cause of death.

He said the cemetery at Malamugal village is associated with a new parish. No one has been buried so far on its land designated as a cemetery.

The bishop said local people, mostly Hindus, have been objecting to making it a cemetery and have moved court despite the church having all licenses and permissions to use its land as a burial ground.

"They objected to the priest's burial because it is the first burial, which they fear could weaken their case," Bishop Gregorios told UCA News.

The prelate said the priest's body was being kept in a mortuary while church officials examine other options such as burying him in another cemetery.

Thiruvananthapuram mayor K. Sreekumar told media on June 3 that the priest's relatives were willing to have his body cremated in the state crematorium if no other options are available.

"The senior officials such as the district collector, the top official of the district and others are trying to convince the people to allow the burial of the priest in the church cemetery itself," he said.

Mumbai High Court in Maharashtra state on May 22 ruled in favor of the burial of Covid-19 victims. It also nullified the civic body's order that all Covid-19 victims should be cremated.

The court quoted World Health Organization documents and said there was no scientific basis for believing that burial of Covid-19 victims could spread the virus if established protocols were followed.

Opposition to the burial of Covid-19 victims has forced court interventions in several cases, mostly from Hindus who prefer cremation, while Christians and Muslims opt for burials.

Tamil Nadu had to amend a law on April 26 to ensure the burial rights of Covid-19 victims following several incidents of violent protests in the southern state.

The amendment to the Tamil Nadu Public Health Act of 1939 stipulated three years in jail for those disrupting the burial of Covid-19 victims.

The government move came soon after violent protest against the burial of neurosurgeon Simon Hercules in his Catholic parish cemetery in state capital Chennai.