People take advantage of free rides offered by the military to help them get home as public transport has been banned as part of a community quarantine order by the government during the Covid-19 lockdown in Manila. (Photo: Maria Tan)

Two members of the Philippines’ Research Institute for Tropical Medicine (RITM), an agency under the Department of Health (DOH), have revealed a list containing the names of dozens of high-ranking government officials tested for Covid-19 despite a lack of testing kits in provinces and major hospitals.

At least 34 senior officials, including their family members, were on the list released on March 22, sparking public outrage.

One institute staff member posted on social media that government officials “sent their [swab] samples to the RITM with instructions to prioritize them despite DOH guidelines stating that one should not be tested if he or she is asymptomatic [not showing Covid-19 symptoms].”

The revelation followed the death of a 34-year-old cardiologist whose Covid-19 test results were delayed for four days due to a “lack of availability” of testing kits.

Philippine President Rodrigo Duterte, his common-law-wife and his daughter are on the list, as are senators, cabinet secretaries and non-government officials.

Publication of the list triggered an outcry and accusations of preferential treatment.

“We need more than 200,000 test kits in one province alone. Prior to the lockdown, more than 500,000 people left Manila to go back to their respective provinces. If one of them is Covid-19 positive, how will that province respond? They do not even have test kits,” said a doctor who wished to remain anonymous.

Meanwhile, the Philippine Congress was to hold a special session today granting Duterte more powers to access a 200 billion peso (US$3.8 billion) fund reserved for national calamities and to “temporarily take over or direct the operation of any privately owned public utility or business affecting the public interest to be used in addressing the needs of the public during the Covid-19 emergency as determined by the president.”

Although still a draft, legal experts have already raised concerns about the president’s “overly broad” powers.

“There is no check on who determines and what criteria are to be used in taking over private businesses. This will lead to abuse,” said a lawyer speaking on condition of anonymity. 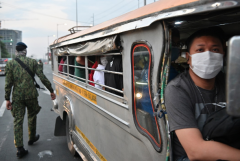 “If government officials put themselves first when it comes to testing kits, even if they are not showing Covid-19 symptoms, how can we trust them with granting the president more powers?” Melanie Fajardo, a nurse, told UCA News.

The Catholic Bishops’ Conference of the Philippines issued revised guidelines at the weekend for bishops and priests to follow during the celebration of Holy Week under strict community quarantines.

The bishops said Catholics observing Masses online or on TV can hold palm leaves. “For those who follow the celebration on TV, there is no need for holy water to bless palm leaves,” according to the circular.