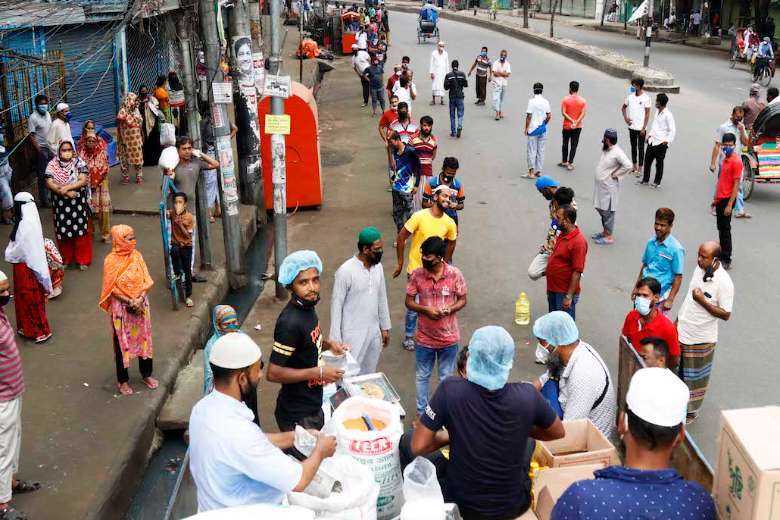 People wait to collect government-subsidized food from a truck in Dhaka on April 8, 2020. The pandemic has caused widespread poverty in Bangladesh. (Photo: Stephan Uttom/UCA News)

Subir Marak is an irregular daily laborer in Telki village in Bangladesh’s central Tangail district who struggles every day to feed his three-member family.

He earns 700 taka (US$8.25) on average when he can find any back-breaking work in agricultural fields in the area.

Just one year ago, Subir, 35, an ethnic Garo Catholic, had a rather happy and comfortable life. In 2008, he migrated to the capital Dhaka with his family to seek a better living.

Subir found a job in a wholesale clothing store and his wife Rita worked in a beauty salon, earning 12,000 taka and 15,000 taka respectively per month. That allowed them to lead a happy life with their only son. They also sent money to their elderly parents regularly.

Sadly, the happiness didn’t last long. When the Covid-19 pandemic struck Bangladesh in March last year, the couple lost their jobs, with their employers paying one month’s salary. They were told that when business picked up, they would be called back. It never happened.

Unable to pay rent and other expenses, the family returned to their village within months.

The two of us saved something when we were working in Dhaka but it has been spent already. Now we have to borrow

“I feel sad because as a husband and father I have many responsibilities. But now I am failing to meet all the needs of my son and family. The two of us saved something when we were working in Dhaka but it has been spent already. Now we have to borrow,” Subir told UCA News.

His wife said they are living in misery and uncertain about the future.

“I was dreaming of a beauty parlor of my own and it would have been possible if everything was all right. Now my dream has been put on hold. We have taken loans from the local association for survival and we are struggling to pay the installments regularly. Our lives are going through complete uncertainty right now,” she told UCA News.

Such stories of misery and poverty triggered by a spike in unemployment due to the fallout from Covid-19 are common across Bangladesh.

The Bangladesh Bureau of Statistics reported that the poverty rate reached 29.5 percent in 2020 from about 20 percent in 2019. Independent analysts say the current rate of poverty is about 40 percent.

Some 13 percent who were employed before the pandemic have lost their jobs in the South Asian nation of more than 160 million, according to a 2020 report by the Bangladesh Institute of Development Studies, a Dhaka-based think tank.

A report by the Bangladesh Economic Association showed more than 36 million people, the majority of them from the informal sector, have lost jobs due to the pandemic.

The International Labor Organization says that one in four young people in Bangladesh is unemployed due to the coronavirus crisis.

In the coming days, 10.5 million people could join the ranks of the jobless due to Covid-19, noted the Policy Research Institute of Bangladesh, a Dhaka-based research organization.

“Even if these 10.5 million people lose their jobs, at least 50 million people (an average of four members per family) will fall into uncertainty,” Mansur said, adding that most sectors of the economy have had to slash jobs.

The jobless millions must get cash and food support for survival, he said.

The government launched cash incentives and food assistance programs for extremely poor communities across the country but both stopped after three months.

Generous individuals and organizations stepped in to help the unemployed and new poor when the pandemic hit Bangladesh, but these have elapsed.

Some private organizations and charities such as Catholic charity Caritas have made efforts to determine the extent of unemployment and to help as much as possible.

Caritas Rajshahi, which covers northern Bangladesh, surveyed 600 households in May and found 67 percent of people employed in the informal sector have lost their jobs and income.

“Many of those who lost their jobs have had their food costs reduced, while others have had their medical expenses reduced. They are working for relatively low wages as they do not have experience in agriculture,” Sukleash George Costa, Caritas Rajshahi regional director, told UCA News.

Many of those who have lost their jobs are selling their assets and land, while others are trying to survive on high-interest loans, Costa said, adding people are in a lot of trouble with the poor getting poorer and people going through endless hardships.

“In order to help, Caritas has disbursed cash, low-interest loans and free produce — and the effort is ongoing,” he added.