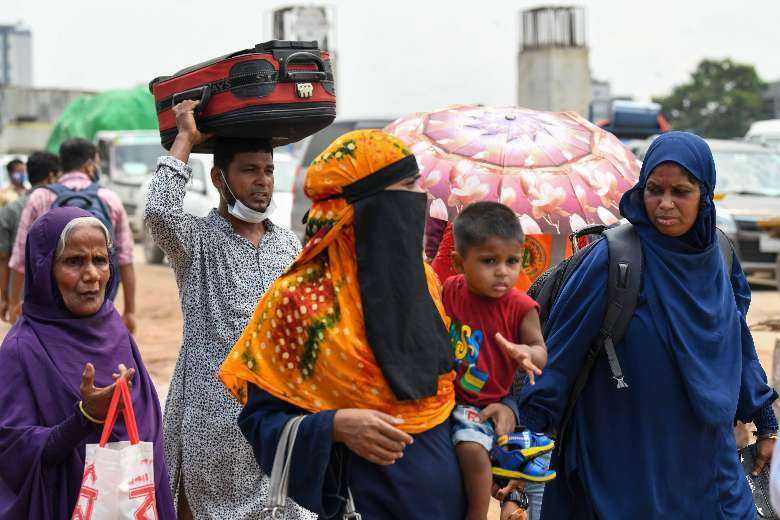 People walk in Tongi of Gazipur district near Bangladesh’s capital Dhaka amid a ban on public transport to curb rising Covid-19 cases in the country. (Photo: Piyas Biswas)

A sharp rise in Covid-19 cases and deaths in districts bordering India and in capital Dhaka has prompted Bangladeshi authorities to impose strict restrictions on movement and public transport, triggering public suffering and hampering church activities.

Bangladesh has seen a sudden spike in cases and deaths in the past week as health experts warn of a potentially deadlier third wave of the pandemic in the South Asian country.

The country recorded 6,058 cases and 81 deaths on June 24, the highest figure in 72 days, amid a constantly rising number of cases and deaths as well as a nearly 20 percent positivity rate.

Last week a study from ICDDRB, an international health research institute based in Dhaka, found that about 68 percent of Covid-19 cases in the capital were the highly transmissible Delta variant, previously known as the Indian variant. The World Health Organization reported that about 43 districts out of a total 64 were facing high risks from the pandemic.

Bangladesh had registered more than 873,000 coronavirus cases and 13,868 deaths as of June 25, according to data from the state-run Directorate General of Health Services.

Amid growing fears that the virus might spiral out of control, the government isolated capital Dhaka by banning all inbound and outbound public transport including bus and train services and imposed lockdowns in seven adjoining districts.

People will go to their offices and, if not, they will lose their jobs. What choices do people have now?

Meanwhile, the National Technical Advisory Committee on Covid-19 recommended "a complete nationwide shutdown" for 14 days to curb the spread of the virus instead of “piecemeal” steps by the government that have been ineffective.

State Minister for Public Administrations Farhad Hossain told the media on June 24 that the government finds recommendations for a complete shutdown logical and preparations to implement it were underway. An announcement will come soon, he added.

The government’s decision to ban public movement and transport has come under criticism as offices and businesses remain open, with people facing immense difficulties to get to work amid an acute shortage of vehicles.

Catholic nurse Nupur Biswas, 37, was on her way to her village home from Dhaka for a three-day vacation when the public transport ban was announced. She returned to the capital fearing she might get stuck in her village indefinitely.

“People will go to their offices and, if not, they will lose their jobs. What choices do people have now?” ‍Biswas asked.

Church activities in border zones have been hampered due to the spike in Covid-19 cases and deaths, officials say.

“Due to lockdown, we have stopped daily Masses but Sunday Mass continues with adequate precautions such as health guidelines and distancing. We are discouraging people from attending Mass,” said Bishop Sebastian Tudu of Dinajpur in northern Bangladesh.

The prelate said the Church’s pastoral and spiritual activities have taken a hit from the worsening pandemic.

“Our priests are unable to visit villages regularly, but they are only doing it in cases of emergency amid risks. We are facing difficulties in dispensing sacraments such as confession, communion and marriage,” the prelate told UCA News.

People are suffering, living in fear and praying for the pandemic to end soon, Bishop Tudu added.