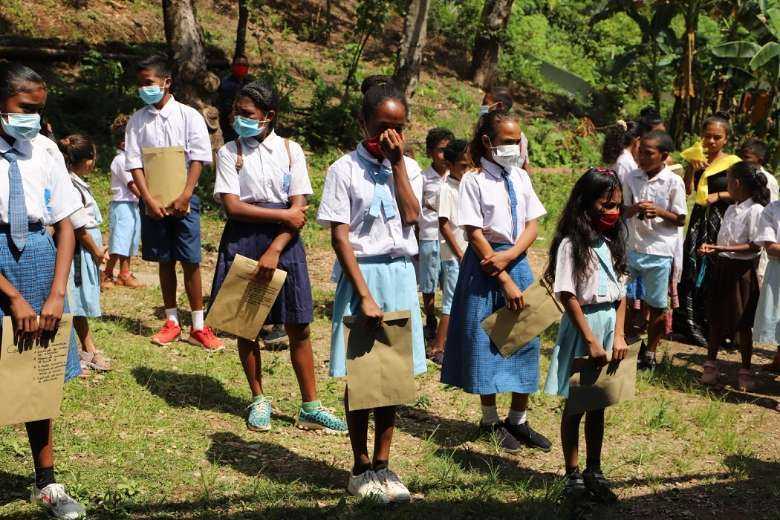 Students in Timor-Leste capital Dili hold envelopes containing course materials to study at home after schools were closed due to the Covid-19 pandemic in this April 19 photo. (Photo: Ministry of Education, Youth and Sports)

A surge in Covid-19 cases triggered by the highly transmissible Delta variant has prompted the Timor-Leste government to close schools barely a month after easing restrictions.

Armindo Maia, the minister of education, youth and sports in the Catholic-majority country, announced the closure on Aug. 17.

The minister stated that this new suspension — after schools were allowed to open on July 19 — would last until Aug. 31 for all public schools across the country and private schools in the hardest-hit areas of capital Dili.

During this period, he said, schools should where possible ensure the continuity of the teaching-learning process through distance learning.

The new policy, Maia said, takes into account the "high level of risk to public health following the identification of several cases of the Delta variant."

He also highlighted the need for reducing the risk of local transmission and its spread within the school and family.

On Aug. 17, Timor-Leste recorded 247 new cases and five deaths. Three of the new deaths were fetuses of three mothers who tested positive for Covid-19.

The country now has 2,349 active cases and a total of 12,682 cases since the pandemic began and 38 deaths. Active cases are mostly concentrated in four municipalities — 887 in Dili, 695 in Ermera, 180 in Covalima and 98 in the Oecusse enclave.

Hirondina Ribeiro Gonçalves, a 22-year-old student at the National University of Timor-Leste, said the latest restrictions made her situation worse.

“The online learning process is a serious problem because of the poor internet network. During lectures, the network is often disconnected,” she told UCA News.

Meanwhile, in the country’s remote areas, school administrators said they would continue to carry out their activities as usual.

"For public schools, they may follow government policies. However, we will certainly continue to carry out school activities as usual while adhering to health protocols," said Franciscan Brother Roberto Fernandez, a teacher at St. Francis Assisi School in Fatuberliu, Manufahi district, about 190 kilometers south of Dili.

He said that their internet network is poor while students do not have the devices for distance learning.

Brother Fernandez said the 700 students in their school from kindergarten to high school are mostly from poor families and might drop out if the school is closed.

“We prevent the worst-case scenario that they will drop out of school. We apply standard health protocols while also preparing anticipatory efforts if anyone is infected with Covid," he said.