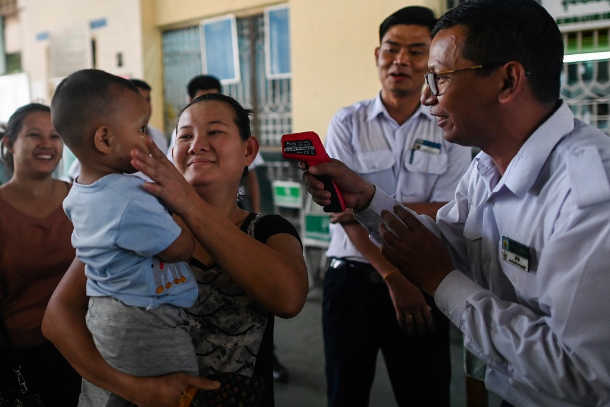 A railway official takes the temperature of a child as a preventive measure against the Covid-19 disease at the central railway station in Yangon on March 19. (Photo: Ye Aung Thu/AFP)

On the evening of March 18, dozens of Buddhist monks went around Mandalay, Myanmar’s second-largest city, chanting prayers to prevent the spread of the coronavirus that has ravaged many countries.

Some Buddhist figures have been promoting non-medical remedies and some Burmese people have been sharing myths about the coronavirus in the Buddhist-majority country.

One monk claimed that eating a lime and three palm seeds would keep the virus away, while another recommended consuming seven ground peppercorns.

In an impoverished country that had been isolated from the world for decades, some people still believe that they remain safe thanks to Theravada Buddhism and the prayers of senior monks.

A doctor in Yangon has reportedly said that Myanmar is lucky because it’s a Buddhist country and senior monks are always praying for safety.

“We have no doubts about the government’s efforts to tackle the coronavirus but such myths and beliefs are not right thinking,” Ashin Ariya Wuntha Bhiwun Tha, a Mandalay-based monk who is involved in interfaith activities, told UCA News.

Myanmar has reported no cases of Covid-19 despite sharing a long, porous border with China, which has had 3,245 deaths from 81,165 confirmed cases since the disease broke out in Hubei province in December.

It also borders Bangladesh, India and Thailand, all of which have reported Covid-19 cases. Myanmar, Laos and Timor-Leste are the only countries in Asean with no confirmed cases.

The World Health Organization (WHO) has urged nations in Southeast Asia to adopt aggressive measures as the number of confirmed cases rises.

“The situation is evolving rapidly. We need to immediately scale up all efforts to prevent the virus from infecting more people,” Dr. Poonam Khetrapal Singh, WHO’s director for Southeast Asia, said on March 17. “We clearly need to do more, and urgently.”

State Counselor Aung San Suu Kyi assured the public in a televised address on March 16 that no confirmed cases of the virus have been found. She called on citizens to support a government fund to help combat Covid-19.

So far, only 144 people out of a population of 53 million have been tested but all the results were negative, according to the health ministry.

Three people who were under investigation over Covid-19 died on March 17 but health officials said their deaths were not related to coronavirus.

A government spokesman said on March 13 that the absence of positive tests was proof that the virus has not reached Myanmar.

“Lifestyle, diet and lack of credit card usage are the main factors behind zero confirmed cases,” the spokesman said without providing any scientific evidence.

Phil Robertson, deputy director of the Asia division at Human Rights Watch, blasted such "irresponsible" statements, saying that they “defy reality and only serve to give a false sense of security to the country’s people about the disease and their risks of infection.”

“The government’s public lack of concern has sparked rumors and speculation about the government’s response, leaving many distrustful and unable to make informed decisions for their families,” Robertson said in a blog post on March 17.

“Being transparent, providing factual information in a timely way and dropping half-baked theories of national exceptionalism to a global pandemic is what’s needed.”

On March 13, the Office of the President announced the cancellation of festivals and celebrations, including the traditional Thingyan water festival, from March 15 to April 30.

Cinemas across the country were closed from March 16, while state-run and private nurseries are also closed until the end of April.

Catholic churches remain open for Sunday services and daily Mass, but bishops have issued guidelines and urged the faithful who have a fever, cough or sneeze to avoid church services.

Bishops also suggested that all meetings, gatherings, fellowships and events in churches and halls be canceled along with catechism classes and worship gatherings and seminars.

The Myanmar Council of Churches urged members to follow the guidelines from the health ministry and to suspend children’s, youth and family gatherings.

The Myanmar Baptist Convention has called on all Baptist churches to limit the number of devotees and not to hold any services with a large attendance until April 30.

The Islamic Religious Affairs Council of Myanmar has also urged those who display symptoms such as a fever or cough as well as the elderly and children to avoid prayers at mosques and pray at home instead.

After the health ministry announced that suspected patients who had died had tested negative for Covid-19, one social media user commented that “something is wrong as all the people who are under investigation show negative results.”

Church workers who talked to UCA News said people remain concerned about the global pandemic and asked whether the zero confirmed cases in Myanmar are due to under-reporting or a cover-up. They also questioned the credibility of the testing laboratory.

“We will get into trouble and many people will die if the virus reaches the country under the broken healthcare system,” San San, who runs a pharmacy in a small town near Mandalay, told UCA News.

On March 17, the British embassy in Yangon advised all UK nationals to leave the country if possible. “The worldwide coronavirus outbreak is expected to put significant pressure on Myanmar’s medical facilities, and they may not be able to offer routine care,” the embassy said.

Myanmar's public healthcare system has all but collapsed due to mismanagement by the military over the last six decades.