After losing their overseas jobs because of the pandemic, thousands of Bangladeshis are struggling to survive A Bangladeshi expatriate worker arrives at Dhaka International Airport after losing his job in Saudi Arabia. Thousands of workers have returned home due to the Covid-19 pandemic. (Photo: Piyas Biswas/UCA News)

Six years ago, Rana Gomes moved to Bidiyah town in eastern Oman to work as a cook in a hotel.

Gomes, 34, a Catholic father of one who attends Maria Virgo Potens Catholic Church in Natore district of northern Bangladesh, spent 300,000 taka (US$3,529) on migration costs, which he managed by selling land that had been in his family for generations.

In March, following the abrupt closure of the hotel due to the Covid-19 pandemic, Gomes returned home with six other Bangladeshi colleagues.

“My employer paid for the airfare and one month’s salary of 40,000 taka. We have been told they would call us back once things get normal. There has been no word from the employer since then,” Gomes told UCA News.

He now fears that his job might have been terminated and he won’t be able to return to his workplace.

Gomes has already spent his savings. He has borrowed money from neighbors and relatives and is now trying to earn money by doing errands including day labor and rearing around 100 ducks in his home village.

“Due to the pandemic, our country’s job market has collapsed and thousands have become unemployed. Only God knows what my lot is in the coming days,” he said.

To get some financial support, Gomes met officials at the state-run Expatriate Welfare Bank for a small loan to start a livestock business, but he has been unsuccessful so far.

“I have a family to look after and without a job we have no future. Even if I cannot go back abroad, the government and development groups should do something for our alternative employment for our rehabilitation,” he pleaded. Bangladesh asked to take back thousands of migrant workers 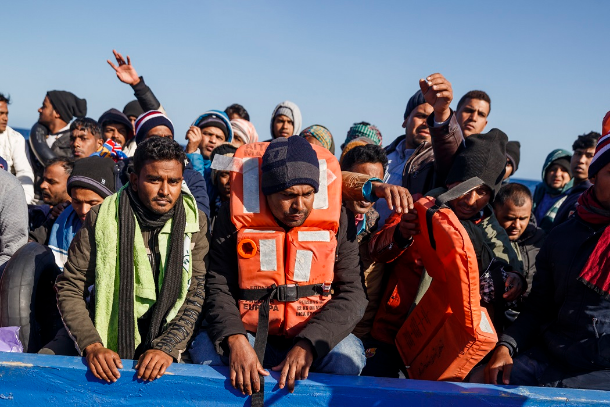 Santosh Sarkar, 50, a father of four who attends St. Peter’s Cathedral Church in Barishal district in southern Bangladesh, has been living in similar distressing conditions since early March.

Sarkar moved to Riyadh in Saudi Arabia 13 years ago and worked as a head mason for a construction firm.

“Due to the Covid-19 outbreak, the firm closed indefinitely and the employer asked us to return home with an airfare and one to two months' salary. I don’t know if there is a job for me when things return to normal,” Sarkar told UCA News.

Sarkar’s eldest son has recently joined an NGO to support the family but his other three children are still at school.

Apart from unemployment, he is also anxious about a loan burden for the purchase of land.

“I recently took a loan to buy land and I have been paying it back in installments. This loan has become a huge pressure for the family. It seems I need to sell our land to pay back the loan,” he lamented.

Like Gomes and Sarkar, tens of thousands of Bangladeshi overseas workers have returned home after losing their jobs since Covid-19 struck this year.

A significant number have managed to return to their workplaces in recent months, but not all. In a media briefing on Aug. 15, Expatriate Welfare and Overseas Employment Minister Imran Ahmed said 61,218 jobless overseas migrant workers are still in Bangladesh.

Bangladesh has about eight million expatriate workers, mostly in oil-rich Middle Eastern countries, and on average they remit home about $15 billion, which is vital for the economy of the impoverished South Asian nation.

Catholic charity Caritas Bangladesh has made some efforts to support about 2,500 jobless and helpless migrant workers, noted Ranjon Francis Rozario, director (programs) of the agency.

“We have several projects for migrant workers including those who returned home jobless and failed to go back. For workers returning from France, Belgium and Italy, we have an entitlement of 150,000 taka for each,” Rozario told UCA News.

Another project, funded by Caritas UK, provides vocational training, business training and a cash incentive of 30,000 taka for 1,000 female migrant workers who returned home due to abuses in various countries, he said.

“Our staff are active in the community identifying victims to support as data is not available. We have shortage of resources and funding, which hinders extension of the schemes to benefit more people,” he added.

Nasrin Jahan, a deputy secretary at the Expatriate Welfare and Overseas Employment Ministry, said an inter-ministerial body has been working to rehabilitate and send back jobless workers.

“In order to support returnee migrant workers, the government has allocated 2 billion taka ($23.6 million) as a stimulus package and another 5 billion taka for low-interest loan support,” Jahan told UCA News.

“Workers rendered jobless due to Covid-19 and their family members can apply for loans of 100,000 to 500,000 taka from the Expatriate Welfare Bank with only 4 percent interest in order to start alternative livelihoods,” she added.

Meanwhile, Gomes and Sarkar are still distraught as they wait for support from any of these schemes.

“I feel sad that remittances from migrant workers like me play a vital role for economy but we are still left out in this difficult time,” Gomes said.