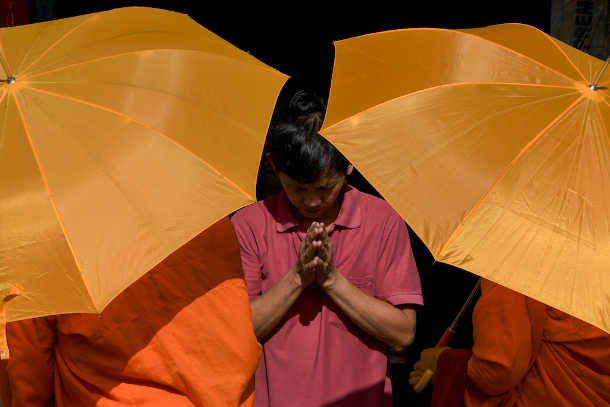 A man prays to Buddhist monks holding umbrellas on a street in Phnom Penh on July 27. (Photo: Tang Chhin Sothy/AFP)

The first seven months of the Covid-19 pandemic have disrupted food security in Cambodia, resulting in higher prices in markets and raising fears of increased rates of wasting and malnutrition among children, according to a report published by UNICEF.

UNICEF executive director Henrietta Fore said that in countries like Cambodia the socioeconomic impact of Covid-19 is disrupting food security, livelihoods and the economy.

“It’s been seven months since the first Covid-19 cases were reported and it is increasingly clear that the repercussions of the pandemic are causing more harm to children than the disease itself,” Fore said in a commentary for The Lancet.

She said an additional 6.7 million children worldwide under the age of five could suffer from wasting — and therefore become dangerously undernourished — in 2020 as a result of the socioeconomic impact of the pandemic.

Cambodia has emerged relatively unscathed from the pandemic compared with elsewhere. There have been 240 confirmed cases and no deaths from the contagion that has reached more than half of this country’s 25 provinces. Of those confirmed to have Covid-19, 197 patients have recovered.

But the coronavirus has battered Cambodia’s already struggling economy. Western businesses began leaving Cambodia amid a crackdown on dissent ahead of the 2018 election which the main opposition party was banned from contesting.

The United States initiated sanctions targeting some in the ruling elite and the European Union partially withdrew trade preferences. More potential sanctions are looming after Cambodia was added to a list of 12 high-risk money-laundering countries by the EU.

According to the World Bank 2020 Spring Cambodia Economic Update, food prices, particularly for meat, eggs and some fish products in Phnom Penh and fresh vegetables in provincial markets, have all increased.

Fore said this may lead to fewer resources for households and contribute to negative coping mechanisms that impact children’s nutrition.

“Loss of employment has resulted in people borrowing for consumption purposes, reducing their food intake and changing the types of food consumed,” she said.

Child nutrition had improved in Cambodia over recent years with a reduction of stunting — low height for age — to 32 percent in 2014 from 42 percent in 2005.

However, Fore said available data on wasting — low weight for height — indicated an increase in wasting rates to 9.6 percent in 2014 from 8 percent in 2005.

“The Lancet analysis finds the prevalence of wasting among children under the age of five around the world can increase by 14.3 percent in low and middle-income countries this year due to the socioeconomic impact of Covid-19,” she said.

This can lead to severe acute malnutrition (SAM), a major cause of death in children under the age of five in Cambodia. Of Cambodia’s yearly cases of SAM, about 2.5 per cent or 60,000 to 90,000 cases will need specialized medical treatment.

“Failing to treat SAM cases adds to the burden of morbidity and mortality in children under the age of five,” said Jalaa Abdelwahab, UNICEF Cambodia deputy representative.

“There is an urgent need to increase resources from the government of Cambodia and development partners to enhance facility and community-based preventive and curative nutrition services in order to improve program coverage and quality.”