Under a strict curfew, the faithful cannot gather for pilgrimages and passion plays Barbara Fernando (right) worries about not being able to pursue her Lenten practices as usual this year. (UCA News photo)

Barbara Fernando worries about not being able to follow her Lenten practices these days.

The 77-year-old Sri Lankan Catholic visits churches with her group during the Lenten season to sing Pasam (Lenten hymns) as a devotional exercise.

For Christians like her, Lent is a period of prayer and repentance for 40 days that begin on Ash Wednesday. During this season they remember the agony and sufferings of Christ.

"There is no way we can do these Lenten exercises as a team because of the curfew. Police arrest those who violate the curfew," said Fernando, who is unable to attend St. Peter’s Church in Basiyawatta, Thalahena.

So far around 3,700 people have been arrested for violating the curfew, which was imposed by the government after the coronavirus infection count reached 100. The three districts in Western Province have been identified as high-risk areas, so the curfew has been enforced until further notice.

The Church canceled Masses and other services from March 15 because of the rapid rise in the number of Covid-19 cases in Sri Lanka. The decision came in the middle of the Lenten season that features common gatherings such as the Way of the Cross, pilgrimages, group prayer services, Holy Hour and passion plays in various parishes. Fasting and praying for protection

The Catholic Bishops' Conference of Sri Lanka had called on the faithful to observe a day of fasting and prayer to protect and heal all affected by the affliction in Sri Lanka and other countries and to rid the world of this devastating virus. 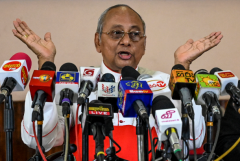 Mahinda Deshapriya, chairman of the Election Commission, said the general election scheduled for April 25 has been indefinitely postponed due to the pandemic.

Rasika Athukorala, 63, recalls trips to popular places of pilgrimage in the country with her family and friends. She visited Hingurana Calvary in Batticaloa Diocese last year.

She said the venue is busy every year during the Lenten season, a time to reflect on the suffering, death and resurrection of Jesus.

The pilgrimage to Hingurana Calvary allows the pious practice of making the Way of the Cross on rugged ground with plenty of rocks.

"Our friends and family members sang, lamented, prayed and carried a heavy cross before the traditional 14 stations. The faces of the devotees as they walked reflected the joy of walking in the light of Jesus," said Athukorala.

"Each meditation in front of the 14 stations is a personal meeting with Christ and a new discovery of his presence in our life."

At the shrines, devotees camp in tents under huge trees for two or three days of devotion that include Mass and meditation. Others rent houses available for the use of pilgrims.

"Hundreds of devotees, mostly Catholics, gathered at the Calvary despite the mountains, distance and the unbearable heat," said Athukorala. "We have lost all the Lenten practices due to coronavirus this year."

“Everyone in the village participates in passion plays on Good Friday," said Sumedha, who has contributed to a passion play in Negombo.

"All villagers contribute to the success of the play, which is put on for free in church premises. We doubt whether we can have all these practices this year among our Catholics."

Anglican Bishop Dhiloraj Canagasabey and Bishop Keerthisiri Fernando have called for common worship on Sundays to be canceled until further notice to stem the spread of the coronavirus.

The bishops urged extra healthcare precautions as recommended by the Public Health Department to mitigate the crisis until it is brought under control.

Fernando said all elderly Catholics and others worry about their regular Lenten practices due to the perilous situation.

"All Lenten pilgrimages, Pasam singing, passion plays and other Lenten exercises have been halted due to coronavirus in the country," she said.