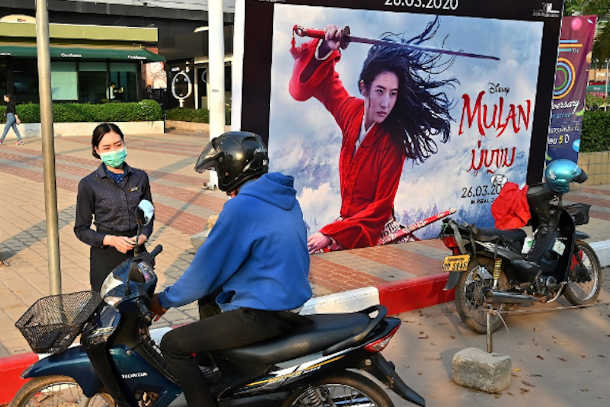 People wearing face masks amid concerns about the spread of the coronavirus talk on a street in Lao capital Vientiane. (Photo: Mladen Antonov/AFP)

Laos expects the value of its exports to fall by at least US$483 million this year — an enormous sum for the tiny landlocked country — after the Covid-19 pandemic caused the closure of factory operations.

The Ministry of Industry and Commerce said the government had set a target to increase exports to $6.42 billion but exports for the first seven months stood at just $2.32 billion amid a huge trade deficit.

Like neighboring Vietnam and Cambodia, Laos has escaped the Covid-19 pandemic relatively unscathed, confirming just 22 cases with 21 recovered and no deaths.

But the economic consequences have been enormous for a country with a gross domestic product of less than $20 billion, the official Vientiane Times reported.

The communist daily newspaper recently forecast remittances to Lao would also decline by about 50 percent in 2020 as a result of the economic crisis triggered by the pandemic.

"More than 100,000 Lao migrant workers have returned home as a result of the Covid-19 epidemic," said Leeber Leaebouapao, chairman of the National Assembly's planning, finance and audit committee.

“A majority of Lao laborers work in Thailand and the rest work in South Korea and Japan,” he said, adding that remittances form a major part in the Lao economy and the government’s poverty reduction efforts.

The World Bank's Lao Economic Monitor said in June that the pandemic could push as many as 214,000 people into poverty in Laos, which has a population of about seven million people.

“Laos is in a bad situation,” one analyst, who declined to be named, said. “Its debt levels are also enormous because of its borrowing to fund major infrastructure projects like dams, which have had a devastating impact on the Mekong River. They will have to tighten spending and their reliance on China will only increase.”

Its financial projections did not include earnings from electricity, a curious omission given Laos intends to make itself “the battery of Asia” through hydroelectric power and the construction of dams across the mainstream of the Mekong River.

China is the top export destination for Laos, followed by Vietnam and Thailand.

Exports were particularly hurt from March to June after the government ordered a suspension of factory operations as the pandemic took hold, but it said the numbers had improved by July amid a partial reopening and a relaxation of lockdown restrictions.