As big garment brands cancel orders, about one million workers have lost their jobs, often without compensation 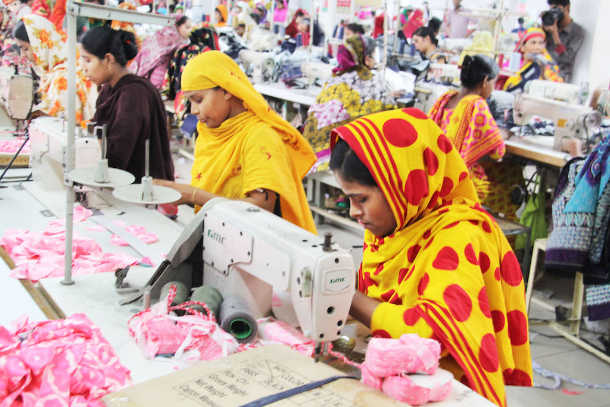 Workers sew clothes at a garment factory in Bangladeshi capital Dhaka. A recent survey says about one million garment workers have lost their jobs due to order cancellations over coronavirus cutbacks. (Photo: Stephan Uttom/UCA News)

In 2007, poverty and unemployment forced Rina Akter and her husband to leave their village home in Lalmonirhat district and move to Bangladeshi capital Dhaka.

The couple and their three children settled in Ashulia, an industrial suburb near Dhaka, where Rina found a job in a garment factory and her husband became a rickshaw puller.

Over the years, they have maintained the family well and bought a piece of land in their home village in the north.

However, the deadly coronavirus outbreak has dealt them a shattering blow. On March 15, Rina’s employer called her and dozens of workers and announced their summary termination, with the only promise to pay their March and April salaries.

“The factory has lost most work orders from foreign buyers and decided to dismiss workers. We saved some money and are surviving for now, but we don’t know what will happen in the coming days,” Rina, 27, told UCA News.

As a sewing operator, Rina’s last monthly pay was 17,000 taka (US$200) including overtime, which she used to pay for monthly expenses including house rent and utilities. Her husband’s income from his rented rickshaw paid for food, but his income has dwindled after Bangladesh imposed a nationwide shutdown to tackle the spread of the virus. Her eldest son recently became a carpenter but his income is insignificant.

While the government has started selling subsidized food items, poor families like Rina’s are struggling to survive. “We only hope this crisis will be over soon and we can have good days again,” she said.

Taizul Islam, 32, has lost his job as a quality controller in a garment factory in Ashulia that produces sweaters. He made about 20,000 taka per month. After keeping an amount for his expenses, he used to send the rest to his family in Kurigram district in the north.

“On March 3, the management dismissed me from my job and told me to collect my salary a week later. I am the only bread earner for my five-member family and I don’t know what to do now,” Taizul told UCA News.

He said dismissed garment workers should be paid at least three months’ salary to survive the crisis period.

Rina and Taizul are among tens of thousands of workers from Bangladesh’s vital ready-made garment industry who have lost their jobs due to the global economic fallout over the Covid-19 pandemic.

Thanks to an abundance of investments and cheap labor, Bangladesh’s export-oriented US$30 billion garment industry has become the world’s second largest after China’s. It supplies clothes to major European and North American apparel brands including Inditex, PVH, H&M, C&A, Primark and Target.

The industry is an economic lifeline for the impoverished South Asian country where 25 percent of its population of more than 160 million live below the poverty line.

The garment sector is the largest industrial employer with an estimated four million workers and accounts for 80 percent of Bangladesh’s annual foreign exchange income.

The coronavirus outbreak that has devastated the global economy has triggered cancellations or withholding of work orders, according to the Bangladesh Garment Manufacturers and Exporters Association (BGMEA).

On the bright side, some major brands including Inditex, PVH, H&M, C&A and Target have decided to support Bangladesh and have reconfirmed work orders worth US$1 billion, it says.

On March 25, Prime Minister Sheikh Hasina announced a special stimulus package of 50 billion taka (US$585 million) for export-oriented industries including the garment sector, noting that the amount will be paid to workers for their salaries up to three months.

The amount should be returned with only 2 percent interest after two years, plus a six-month grace period for inability to pay, a government circular noted.

Despite such developments, up to one million garment workers in Bangladesh have been dismissed with or without pay, according to a survey by the Worker Rights Consortium of Penn State University in Pennsylvania state of the US published on March 27.

Brands and retailers are postponing the delivery of orders that have already been produced by garment factories, so invoices cannot be raised. They are also canceling all upcoming orders and refusing to pay the cost of raw materials already purchased by suppliers, The Guardian reported.

Rights advocates describe work order cancellations by brands and the summary termination of workers as a grave injustice.

“Factory owners cannot dismiss workers summarily or close down factories without pay, which is not only unjust but also a violation of labor rights. This is unacceptable,” Father Albert Rozario, a member of the Justice and Peace Commission of Dhaka Archdiocese, told UCA News.

The parish priest of St. Joseph Catholic Church in Savar, an industrial hub, said he is aware that some factories closed but paid workers, others suspended workers without pay and some forced workers to continue working without pay.

“It is true garment makers are facing losses due to the current crisis, but on the other hand the government has offered them a stimulus package to overcome losses. They should be sympathetic to workers because this situation will not continue forever,” Father Rozario added.

A trade unionist expressed similar sentiments. “Only a handful of factories closed down with pay to workers; most factories terminated workers without payments. There are factories that employ workers on a daily basis, and they are suffering the most,” Khairul Mamun, organizing secretary of the Garment Workers Trade Union Center, told UCA News.

The actual number of terminated or suspended workers is more than one million, he claimed.

“We have demanded the suspension of work at factories during the crisis as it is not possible to maintain social distancing, but workers have been fired and then factories closed. They cannot earn and eat now. This is a grave injustice,” Mamun added.

Munir Hossain, a BGMEA director, said the organization is not aware that workers have been terminated without pay or forced to work without pay. Moreover, the government’s stimulus package only covers salaries for workers, which is not enough to keep factories running, he said.

“It is true many owners are facing losses due to work order cancellations at the last moment, but we have told both owners and workers to be patient. Once the factories start getting orders, they will be able to pay workers as well,” Hossain told UCA News.