In Gujarat, PM Modi's heartland, the health system is collapsing under the weight of the pandemic 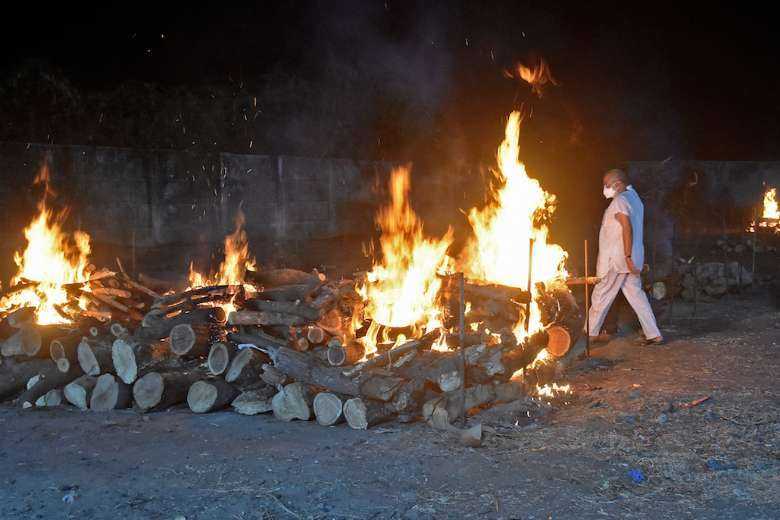 Burning funeral pyres of Covid-19 victims during a mass cremation in Surat in Gujarat state on April 13. (Photo: AFP)

Seven Catholic priests have died of Covid-19 in the space of four days in India’s Gujarat state, one of the worst-hit areas where government and private hospitals are adding more beds as infections spiral out of control.

In one day, April 19, Gujarat reported as many as 7,107 fresh coronavirus cases and 177 deaths. The death toll has reached 5,494 since the pandemic hit the western state last year.

Father Pascal Jacob Ninama of Baroda Diocese is the latest victim. The 56-year-old died on the morning of April 20. Father Paulraj Napoleon of the same diocese died of the virus on April 17.

“All seven of them died of Covid-19 between April 16 and 20,” said Father Cedric Prakash, a Jesuit social activist based in Ahmedabad, the state's largest city.

“The situation here is very bad and beyond imagination. You can see long queues in front of hospitals to get their sick admitted. You can also see lines of dead bodies waiting to be cremated,” he told UCA News

The government “is in denial mode” and “not sharing the real picture,” the priest said, sharing the common fear that the state's healthcare facilities have collapsed, unable even to provide oxygen to care for the sick.

Indian Prime Minister Narendra Modi was chief minister of his home state Gujarat for fourteen years until 2014. While heading the state government, Modi touted Gujarat as a role model of development in the country.

In the run-up to general elections in 2014, Modi promised to implement the Gujarat model across India to turn it into a prosperous nation.

Modi’s critics claim the state’s inability to deal with Covid-19 is proof that the so-called Gujarat model of development was a media creation.

“The Gujarat model is nothing but media publicity. The state lacks basic facilities to take care of the poor and the middle class,” Father Prakash said.

“It is true some people under Modi became rich and super-rich, but that does not mean that all the people of Gujarat have become wealthy.”

Gujarat Deputy Chief Minister Nitin Patel, who is handling the health ministry, on April 18 admitted that the state's infrastructure is stretched.

“The present requirement of beds and other healthcare facilities in the wake of the spike in coronavirus cases is more than the state administration’s capacity,” he said.

Suppression and concealment of accurate data would generate more serious problems, including fear, loss of trust and panic among the public at large

Patel said Gujarat is adding more than 9,000 new coronavirus cases daily. Although new facilities have been added, they fall short of the increasing demand.

“Suppression and concealment of accurate data would generate more serious problems, including fear, loss of trust and panic among the public at large,” the court noted.

The court observed that such trust would eventually “persuade the public at large to strictly abide by the standard protocol of wearing masks in this grave situation.”