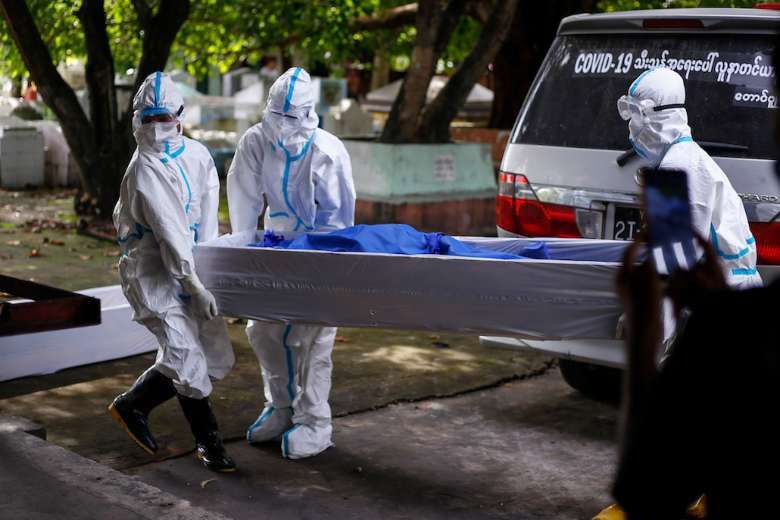 Volunteers carry the coffin of a Covid-19 victim before a cremation in Taungoo, Bago, on July 8. (Photo: AFP)

At least 60 pastors from various Christian denominations have died of Covid-19 in the past six months in Myanmar's Chin region, where cases of the highly contagious Delta variant are surging rapidly.

From January to July 6, at least 60 pastors from Kalay township, Sagaing Division and northern Chin state, which borders India, died of the coronavirus, according to records from the International Chin Christian Minister Fellowship.

The records show 48 pastors died in June alone, with nine dying from July 1-6.

Three priests from Kalay Diocese died within a week last month and several priests have also suffered from symptoms of the virus.

The pandemic’s third wave, which arrived from India, has spread to other townships in Chin state and Kalay township after Myanmar’s health authorities announced that new variants including the Delta variant had been found.

At least 500 people died of Covid-19 in Myanmar in June amid a lack of oxygen tanks, a proper healthcare service and a crackdown on health workers and volunteers by the military, according to aid groups.

We pray for the end of the pandemic, the end of violence and wars, poverty and hunger

The spike in cases has prompted the suspension of public Masses and other liturgical celebrations in the dioceses of Hakah, Kalay, Mandalay and Taungngu.

The healthcare commission of the Catholic Bishops’ Conference of Myanmar (CBCM) has issued guidelines on how priests should celebrate religious rituals, Masses, confession, anointing of the sick, funerals, baptism and confirmations.

Bishop Isaac Danu of Taungngu has warned that the third wave of Covid-19 is more severe and has claimed more lives.

He urged priests, religious and the faithful to strictly obey guidelines from health authorities and the CBCM’s healthcare commission. They should conduct prayers and say the rosary at home and take care of people in dire need of healthcare, livelihood and social support, Bishop Danu said.

Cardinal Charles Bo of Yangon has appealed for prayers for an end to the pandemic and for peace.

“We pray for the end of the pandemic, the end of violence and wars, poverty and hunger,” he said during a rosary.

Local authorities have announced stay-at-home orders in Chin, Kalay township, Yangon and Mandalay and the closure of all schools effective from July 9.

Thousands of doctors, volunteers and civil servants have joined a mass civil disobedience campaign to oppose the military regime

Myanmar’s health system had struggled to contain the deadly virus even before the Feb. 1 coup, which toppled civilian leader Aung San Suu Kyi.

Thousands of doctors, volunteers and civil servants have joined a mass civil disobedience campaign to oppose the military regime.

Access to medical services is even more challenged in remote border regions where civil resistance groups have actively engaged in fierce fighting with the military.

The country’s inoculation drive has ground to a halt because of a vaccine shortage following the military seizure of power five months ago.