Workers pack vegetables at Muladuli market in Pabna district of northern Bangladesh on May 11. Demand for produce has slumped due to hte Covid-19 pandemic. (Photo: Stephan Uttom/UCA News)

The year 2020 has turned out to be the worst in decades for Nazrul Islam, 40, a Muslim farmer and small businessman from Pabna district in northern Bangladesh.

All year round, Islam’s livelihood depends on 12 acres of land he uses for a poultry farm and cultivating seasonal vegetables and fruits.

The Covid-19 pandemic has devastated his sources of income. “I have good harvests of guava, jujube and eggplants, but prices have fallen below one quarter of the normal level. Eggs from the poultry farm have piled up but prices and sales have dropped. I am facing a grave crisis,” Islam, 40, a father of four, told UCA News.

A few years back, Islam invested about 5 million taka (US$58,800) to set up his poultry farm to generate additional income. He fears the farm is on the verge of collapse due to the nationwide shutdown to stem the pandemic.

The government announced a special 30 billion taka loan package to support tens of thousands of affected farmers, rural professionals and small businessman during the crisis. People from these groups can seek collateral-free bank loans ranging from 75,000 to 3 million taka with a 9 percent interest rate. Bangladesh Bank, the central bank, issued a circular in this regard on April 20.

Islam alleged that a local branch of state-run Agrani Bank refused to accept his loan application for 500,000 taka without collateral.

“It seems small farmers and businessmen won’t be able to access this package, while industrialists, who are not involved in farming at all, can. Rural farmers like me are in a dire situation but unable to get the support,” he said.

Nearly penniless, his family are likely to face a gloomy and dull Eid-ul-Fitr feast at the end of Ramadan on May 25, Islam said. Due to the fall in prices, farmers in Pabna district have left okra in their fields. (Photo: Stephan Uttom/UCA News) 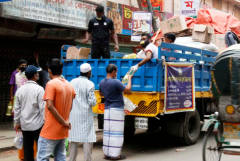 He buys vegetables from the local market and sells them in Dhaka as well as in Narayanganj, an industrial district near the capital.

The Covid-19 pandemic has incurred losses for Ali as more than half of the 100,000 taka he recently invested has been wasted.

“Farmers are selling their produce at low prices as demand has slumped, and we are unable to make a profit as prices have dropped overall. Like farmers, we are also facing a great loss and surviving hand to mouth,” Ali told UCA News.

He applied for loan of 200,000 taka from the local branch of state-run Janata Bank, but the application has not made any progress yet.

“I made profits last year and invested the amount, which is gone now. I don’t know what will happen as the situation is not likely to improve soon,” he said.

Like farmers, small traders are in dire straits, said Abdul Raazak, secretary of the Wholesale Vegetable Traders Society at Muladuli market in Pabna.

“Usually, small traders take out loans from time to time to continue business, but now they are unable to pay back as they are in loss. Unless the government takes the plight of farmers and traders seriously, thousands will become penniless,” Raazak told UCA News.

In largely agrarian Bangladesh, about 41 percent of the country’s more than 160 million inhabitants are involved in agriculture, according to the Agricultural Census 2018 of Bangladesh Bureau of Statistics.

There is no reliable data on millions of small and rural people involved in agro and non-agro businesses who make up the backbone of the rural economy.

While the Covid-19 pandemic has hit all spheres of society, small and marginalized communities are being deprived of aid and stimulus packages.

There have been public and media backlashes over corruption and theft of food grain, mostly rice, from the government by local politicians and officials.

Now, there are allegations of discrepancies in distributing stimulus loans to support affected farmers and traders.

Catholic charity Caritas Rajshahi, which covers northern Bangladesh, has found poor farmers are being denied loans and facing dire conditions. In a recent study, it found 135 families in three villages in Rajshahi district applied for loans but were unsuccessful.

It also found that rural employment has increased significantly, while 75 percent of rural families have been borrowing money from local loan sharks at high interest rates and 85 percent of families have reduced their monthly food budget to cope with the Covid-19 crisis.

“It is very common in Bangladesh that when there is an allocation for grassroots people, local politicians and officials intervene, so the subsidy goes to those who want it, not to those who really need it. There are reasons to fear the same thing will happen with the Covid-19 support package,” Sukleash George Costa, Caritas Rajshahi regional director, told UCA News.

An officer from Pabna district branch of Agrani Bank, speaking on condition of anonymity, said banks are facing double trouble over the special loan package.

“We are aware of the Bangladesh Bank circular but we are under pressure from local politicians and officials. Banks can provide loans and they also have to ensure that the loan is paid back. We know who is needy and who will return it, but the imbalance occurs due to pressure,” he told UCA News.