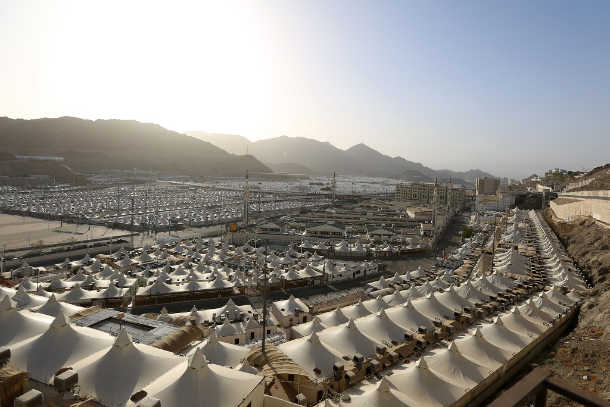 Pilgrims' tents located between the holy sites of Mount Arafat and Mina in Mecca on June 23. (Photo: AFP)

Saudi Arabia will either scale back or call off this year’s hajj pilgrimage in Mecca as a perilous Covid-19 situation threatens the world’s largest religious gathering of mostly Asians.

The kingdom is exploring all possible options before making a decision on the annual ritual, which is fraught with religious, political and economic risks.

Indonesia, the world's largest Muslim country that sends around 200,000 pilgrims annually, has announced its decision to stay away from this year’s hajj. Singapore, Malaysia and Brunei have followed suit.

The choice before ruler King Salman is a “toss-up between holding a nominal hajj and scrapping it entirely,” AFP recently quoted a South Asian official in contact with Saudi hajj authorities as saying.

Indonesia, Pakistan, India and Bangladesh together account for some 600 million or one third of the world’s 1.8 billion Muslims.

The hajj, a must for able-bodied Muslims at least once in their lifetime, could act as a major potential vector of the coronavirus as it packs millions of pilgrims from all over the globe into congested religious places in Saudi Arabia, already hit hard by Covid-19. The kingdom had recorded 164,144 Covid-19 cases and 1,346 deaths as of June 23.

The hajj this year is due to run from July 29 to Aug. 4. Pilgrims pray at the Grand Mosque, circumambulate the Kaaba — a cube structure draped in black — and visit Mount Arafat. The rituals conclude Eid al-Adha, a celebration that marks the end of hajj when pilgrims change their white ihram robes for regular clothes and sacrifice sheep, goats and camels.

Saudi Arabia in February suspended umrah, a non-mandatory pilgrimage which can be performed year-round, because of the virus. The kingdom has also advised Muslims to delay travel arrangements for the hajj this year.

Limiting its scope or canceling the pilgrimage would be a blow to the kingdom, which takes great pride in organizing the global spiritual event. King Salman’s political legitimacy also extends to his official title of “Custodian of the Two Holy Mosques” in Mecca and Madena.

A reduced hajj with local participation is a likely scenario, senior officials in the kingdom said.

Islamic scholars have highlighted the reopening of mosques, particularly in Mecca, after 73 days of a nationwide lockdown on June 21 as a conducive factor for the hajj to take place this year.

Commercial and economic activities are now allowed in all Saudi cities and regions provided they follow preventive protocols on social distancing and wearing masks. However, gatherings of more than 50 people are banned. Individuals or facilities that violate the rules face penalties.

Residents of the kingdom have been urged to download the Tawakkalna and Tabaud (distancing) applications on their smartphones to get information on health instructions, directives and developments about the virus.

Islamic scholars said the kingdom may opt for a cut in global allocation while excluding aged persons and persons from worst-hit countries from this year’s hajj. The country will abide by World Health Organization directives on Covid-19.

Already many global events, including the Olympic Games in Tokyo, have been forced to delay or cancel due to the viral outbreak.

To the kingdom’s disadvantage, there was a stampede in Mecca in 2015 during the hajj that claimed up to 2,300 lives.

Under Crown Prince Mohammed bin Salman’s reform program on religious tourism, the kingdom aimed to increase its income from the umrah and hajj pilgrimage by U$12 billion this year. The probable loss of revenue will batter the kingdom’s economy, which is already reeling under the twin shocks of a slide in oil prices and the pandemic.

The current pattern of the hajj has been observed since the year 630. On about 40 occasions, the pilgrimage has been disrupted for political, economic or health reasons, all before the founding of modern Saudi Arabia in 1932, according to the Riyadh-based King Abdulaziz Foundation for Research and Archives.