A rice field in Pabna district of Bangladesh. Many farmers are facing a crisis over the lack of agricultural workers to harvest rice due to the Covid-19 pandemic. (Photo: Stephan Uttom/UCA News)

Babul Sikdar has been passing days and nights in anxiety at a time which is supposed to be a busy and happy period of the year — Boro (winter rice) harvest season.

Babul and his family own 50 acres (20 hectares) of agricultural land in Mohonganj in Netrokona district that is used exclusively for cultivating rice, the staple food of Bangladesh.

After keeping an amount for the family, Babul sells the rest in the market to survive all year round. But due to the Covid-19 pandemic and Bangladesh's nationwide shutdown, Babul fears his crop may wither in the fields.

“This year’s weather was favorable and I was expecting a bumper harvest. But there are no agricultural laborers like in previous years. I am extremely worried about whether I can bring home the harvest,” Babul, 50, a Muslim and father of four, told UCA News.

As there has been a scarcity of farm workers in the area almost every year, Babul even booked a team of 25 workers from Kushtia district with advance payment of 20,000 taka (US$236), but they cannot come due to the restrictions on movement. 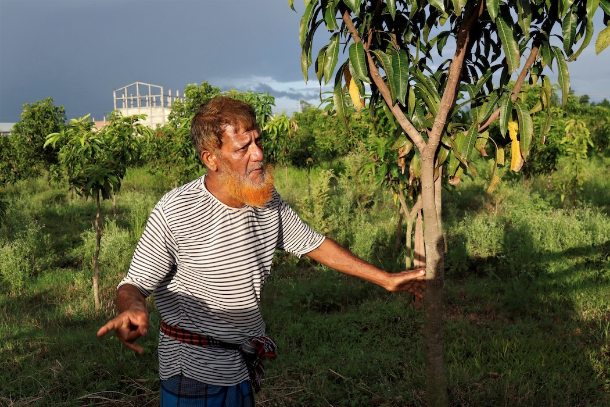 “The workers told me over the phone they are unable to come due to restrictions on movement and lack of transport. The local agricultural office told me that they will help get workers, but I am worried because time is running out fast,” he said.

Like Babul, farmer Idris Ali from Dharampasha in Sunamganj district is also worried about his rice in the fields.

Idris, 45, a Muslim father of four, has planted rice on his 40 acres (16 hectares) of land, which is ready to be harvested. He booked a team of 30 workers from Pabna district to do the harvesting, but they are unable to come.

“We rely on workers from the northwest for planting and harvesting paddy from our fields. Without them it is impossible to grow rice here. I am passing sleepless nights fearing my paddy might be wasted on the fields and I will become penniless,” Idris told UCA News.

Moreover, there have been warnings about flooding in the area, making him even more uneasy about a looming disaster.

As agricultural officials promised to make arrangements for farm workers to help with harvesting, Idris has joined hundreds of local farmers to press requests for workers.

Nazmul Islam, an agricultural officer in Dharampasha, admitted that farmers are under double pressure due to a lack of farm workers and an imminent flood.

“Paddy has been planted in 37,720 hectares of land in the area, which is ready to be harvested. Those who can have started harvesting, and we are in the process of helping those in need. The Agriculture Ministry has a plan to issue special passes to workers and we have listed areas from where they can come for harvesting,” Nazmul told UCA News.

Already about 700 workers have arrived in the area for harvesting and more will come.

“We are ensuring the workers follow the prescribed Health Code and we are also collaborating with police in this regard. Another 20 days can save the harvest and farmers,” he said.

He added that the weather department had warned about extensive rain from April 17-20 which might trigger flooding and inundation of crops.

Netrokona and Sunamgnaj are part of the haor (wetland ecosystem) region of Bangladesh. They become extensive water bodies during the monsoon and dry up during the post-monsoon period. The area is also prone to seasonal and flash floods every year.

“Life of people in the haor region depends on cultivation of rice. In 2017, massive untimely flooding left many people penniless, and this time the deadly virus has joined to threaten them,” Snal told UCA News.

Caritas has distributed hygiene kits to people and has a cash handout package for needy farmers, but it cannot reach out because of restrictions on movement of people and vehicles.

“If the farmers fail to harvest paddy and flooding destroys their crop, we will offer them support for rehabilitation,” Snal added.

Bangladesh grows rice three times a year and is the world’s fourth-largest rice producer after India, China and Indonesia. Rice plays a vital role in its economy. Nearly 75 percent of cropland and over 80 percent of the irrigated area of Bangladesh’s 8.57 million hectares of arable land are used for rice cultivation, according to the Bangladesh Rice Research Institute.

Rice offers employment for 48 percent of households or about 13 million rural families in a country where about 80 percent of people live in rural areas, it noted.

Covid-19 has infected 1,012 people and caused 46 deaths in Bangladesh, according to official data from the Health Ministry.

The pandemic has forced the government to impose a nationwide shutdown and ban public transport and movement.

The government has also announced schemes to support the poor and needy with food and cash relief, while it has launched stimulus packages for the industrial and agriculture sectors to overcome losses during the crisis.

The government intends to supply harvesting machines from its own stock to help farmers in 25 districts that depend on workers from other areas for harvesting, according to a circular from the Agriculture Ministry.