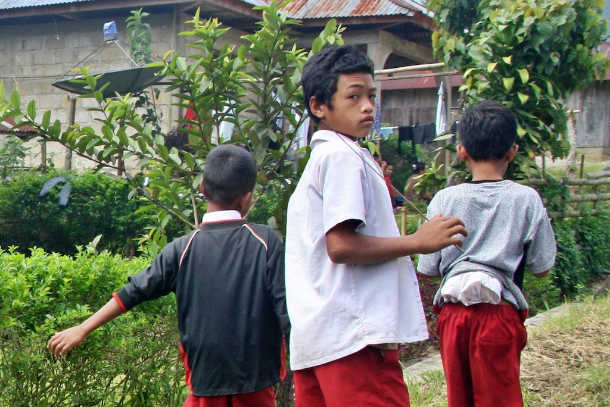 Elementary students walk home from a school in Manggarai district of Catholic-majority Flores island in May 2019. Covid-19 has made it difficult for many students to access education due to limited internet access. (Photo supplied)

The disparity in Indonesian education has widened since the Covid-19 pandemic began spreading its power.

Countless schools have closed, and five months later doubts linger as to when things will return to normal.

Some schools in areas where infections are very low have gradually resumed classes, but it does not mean the problem has gone away.

Last week the Federation of Indonesian Teachers Associations said at least 42 teachers have died due to the coronavirus and hundreds had been infected. It added weight to a recent study that said over 70 percent of schools were not ready to implement social distancing protocols.

However, all this is the tip of the iceberg when it comes to the tribulations plaguing the Indonesian education system.

No one would deny the fact that the pandemic has adversely affected many aspects of life, and one might jump to the conclusion that the infection is the “master of malfunction” in Indonesia’s education system.

A closer look, however, shows it as an additional problem but one which has laid bare inherent failures and an ugly reality within the education system.

When the government instructed schools to switch to distance learning in March, only a few schools were ready and most of them were in cities.

For urban schools with adequate equipment and a better internet connection, conducting online lessons was not so much an issue. It was a severe problem for schools in remote areas that lacked internet connections or electricity and where not many people have smartphones.

Even before the pandemic, many schools — especially in isolated areas — were in a sorry state. Many were in dire straits financially and the virus has pushed them further to the brink of closure.

In some areas, students are studying in facilities that are far from being school-like, while others have to walk many kilometers and deal with nature’s dangers to reach their school.

A lack of quality teachers is another problem. Indonesia has over three million primary and secondary school teachers, more than half of whom are not certified, according to government figures.

This is because in many parts of the country schools lacked teachers. To address this, many non-permanent people were hired whose main qualification was a passion for teaching.

During the pandemic, these teachers have suffered the most as they are paid based on classroom attendance, while full-time qualified teachers have had their pay cut.

Most Indonesian teachers — except those in prestigious schools — receive roughly US$230 per month, which is certainly not enough for those who have children.

There is also an unfair distribution of basic school infrastructure in many parts of the country, with schools in rural areas playing second fiddle to urban ones. This is something that the government has failed to solve in the 75 years since becoming independent.

Some of this can be blamed on a lack of political will, but corruption over the years has also played a major part.

According to government statistics, Indonesia has more than 179,000 schools, of which more than 33,000 have electricity but no internet, while more than 7,500 others are without both.

A study last year by the Indonesian Polling and the Indonesian Internet Service Providers Association revealed that more than 64 percent or about 170 million of the country’s 264 million people have access to the internet. Those who didn’t were overwhelmingly from rural areas.

The Ministry of Information and Technology has allocated around $530 million to help schools and students struggling to meet the necessary requirements to conduct distance learning during the Covid-19 pandemic.

It includes phone-credit subsidies for about 50 million students, teachers and lecturers, as well as providing cellphones for students from poor families.

For schools beleaguered by the pandemic, this is only a temporary reprieve as the underlying problems still need addressing.

It’s almost certain that Indonesian education has drastically changed because of the pandemic, and schools will have to be better prepared if another force majeure happens again.

The education system and its curriculum have naturally focused on education in schools, while homeschooling, which is also important, has been neglected. The lesson Covid-19 has provided the government is that studying at home or homeschooling is a viable alternative in the future.

Before the pandemic, online learning was associated with Indonesia’s Open University where everything is online.

Undeniably, online learning has the potential to create or widen social and economic disparity. For the haves, it is not a problem, but for the have-nots the burden is heavier because they will have to obtain the computers, mobile phones and internet packages to be able to learn.

On Aug. 14, President Joko Widodo said the government was committed to improving the country’s education and would spend $37 billion, or 20 percent of the state budget, on education next year, up from $34.5 billion this year.

He said the money will be used to carry out educational reforms through the transformation of school managers and teachers, and the acceleration of improving the quality of educational facilities and infrastructure, especially in disadvantaged, rural and remote areas.

Widodo admitted national education is lacking in many aspects. Hence, he emphasized the importance of innovation and technological progress in schools.

Part of the budget is to meet daily operations of schools and also to pay teachers, particularly those teaching in private schools and the one million non-permanent teachers who have lost their income due to the pandemic.

One can only hope this money goes to where it is supposed to and does not fall prey to the corrupt, which has happened so often in the past.